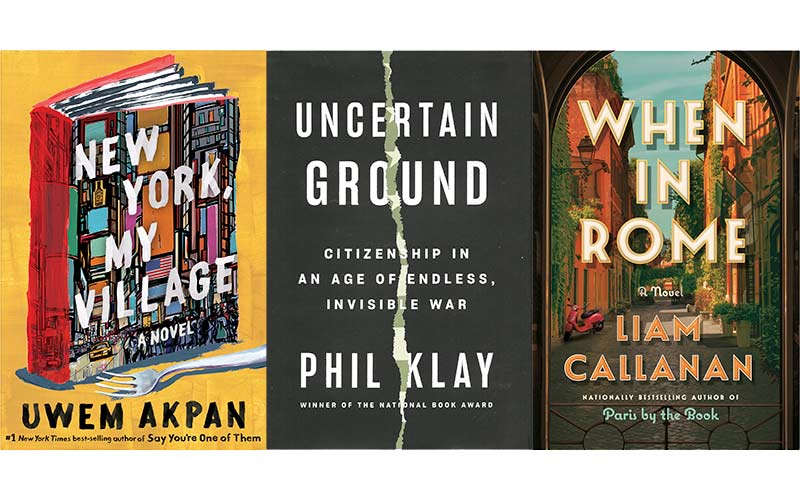 “As Earth Without Water” — Katy Carl (Wiseblood Books)
Ten years after artists (and romantic partners) Dylan and Angele have parted, he reaches out to her. To Angele’s surprise, Dylan is now a monk known as Brother Thomas Augustine, and just weeks away from ordination. He has turned to his old partner after an experience in community that has thrown him into spiritual tumult, casting a cloud over his future. The denouement of this debut novel is none too sentimental but holds out the promise of conversion and redemption in the face of devastating trauma.

“New York, My Village: A Novel” — Uwem Akpan (W.W. Norton & Company)
Ekong Udousoro arrives in New York to edit history books about the aftermath of the 1967-70 Biafran civil war. From this premise, writer Uwem Akpan’s first full-length novel examines how refugees struggle for identity in their adopted homes. By turns wry, satirical and darkly historic, the book sees the subtle racism extant in the publishing industry and by extension, much of contemporary American society. For Catholics, the novel’s great success comes by urging readers to consider one of Christianity’s most difficult but necessary challenges: to love our neighbors and welcome the stranger.

“Every Cloak Rolled in Blood” — James Lee Burke (Simon & Schuster)
Still going strong at age 86, crime novelist Burke’s most recent title is the fourth part of a semi-autobiographical family saga pondering the mysteries of evil and why some seem to willfully embrace it. For balance, Burke often flavors his stories with at least one “truly good” character, and here some ghost-like creatures propel the narrative, adding a supernatural edge to his tale. With allusions to the dangers of political division and mob rule, the book may resonate with readers who fear a malevolent Zeitgeist may be close at hand.

“Infinite Regress” — Joshua Hren (Wiseblood Books)
This timely fiction about the struggle between religious faith and the forces of nihilism is both entertaining and deeply thoughtful. The story, which manages humor, pathos and moral discourse reminiscent of Dostoevsky, follows the progress of Blake Yourrick, who takes any job he can get after racking up huge student debts pursuing a useless degree. When a former mentor (and defrocked Catholic priest) shows up, the battle between evil and spiritual fortitude gets to the heart of where society appears to be headed. “Infinite regress” is a philosophical concept whereby the existence of a creator-God is unprovable, thus questions of morality, sin and salvation become endless speculation. Yourrick’s eventual victory over meaninglessness brings a satisfying, if fragile, resolution to the tension in the narrative.

“When in Rome” — Liam Callanan (Penguin Random House)
This novel, due in February 2023, will almost certainly resonate with Catholic readers. We are introduced to Claire Murphy, a middle-aged professional woman, who suddenly finds herself forced to discern whether to become a nun or rekindle a lost college romance. By turns funny, smart and faithful, Liam Callanan’s real strength here is in showcasing the real struggles of ordinary Catholics to find grace and contentment in whatever vocation they choose.

“The Deep Places: A Memoir of Illness and Discovery” — Ross Douthat (Penguin Random House)
It is said that Catholicism contains the most complete theology on suffering. In this moving memoir of his three-year struggle with the debilitating effect of Lyme’s disease, New York Times columnist (and Catholic convert) Ross Douthat brings us a 200-page primer on how suffering can take on redemptive meaning. Recounting his physical miseries as this mysterious disease seemed to be threatening his mind and body, Douthat is stunned by the medical community’s often dismissive attitude toward an affliction that resists easy remedying. Douthat’s experience forced him to do some hard thinking on the meaning of suffering and the capriciousness of nature, and suggests that “if God gave his son to the cross, then a version of the same test is what every Christian should expect.”

“Uncertain Ground: Citizenship in an Age of Endless, Invisible War” — Phil Klay (Penguin Random House) In this 22-essay collection, Klay, a former U.S. Marine deployed in the Iraq War, brings deep insight into the impact of armed conflict on the human psyche. As a Catholic, he shares where and how religious faith can be found amid the horror and bloodshed of modern warfare. One essay, “Tales of War and Redemption,” covers examining one’s conscience when making moral choices. “You can accept the miraculous or not, the divine or not. Either way, we remain both blessed and guilty, obliged to absorb the full radiance of the world and to accept the consequences of our failings as people, as members of churches, as members of nations.”

“Our Lady of Hot Messes: Getting Real with God in Dive bars and Confessionals” — Leticia Ochoa Adams (Ave Maria Press)
In a highly personal but compelling series of essays, Adams discusses her transformation from an angry, abused, promiscuous self-loathing young girl and mother, to a contemporary evangelist who believes that Christ’s love is always within our grasp. This is a moving story of salvation after years of suffering, sin and irresponsibility. Working through her profound grief after her son’s death by suicide, Adams offers a message both simple and staggering: God wants us to trust in his love, no matter what bad choices we have made, no matter how keen or life-changing is our pain. She emphasizes the need for spiritual and psychological healing as a path to unity and full communion in the church and society, writing, “The world is on fire. Working on my own sins and giving space to those who have been treated unjustly are ways I can learn to put out the flames.”

“Brave Water” — Sarah Robsdottir (Voyager Comics & Publishing)
A haunting encounter with a fundraising flyer detailing how clean-water-collecting young girls in Africa become targets for kidnapping and human trafficking inspired this debut novel. Set in eastern Africa, the story follows teenagers who battle a human trafficking ring to save a kidnapped friend. The author has created vivid characters and makes good use of simile and metaphor to paint word pictures of incidents both prosaic and profound. This is a splendid (and socially enlightening) read not only for teenagers, but for just about anyone with an appreciation for poignant storytelling, and Robsdottir is donating a portion of her proceeds to clean water and human trafficking initiatives.

“Breda’s Island” – Jessie Ann Foley (Quill Tree Books)
Brash and antisocial teenager Breda Moriarity is sent from Chicago by her feisty Irish-born mother to spend a summer in Ireland. There Breda meets her widower grandfather, Granda Davey, who, despite his own secrets, grudges and suffering, helps Breda learn the importance of family, community, acceptance and personal accountability. This is a delightful coming-of-age tale which, while aimed at younger readers, will certainly strike a chord with most Catholic (especially Irish Catholic) readers.

– – –
Mike Mastromatteo is a writer and editor from Toronto.

Tags: Book Review
Copyright © 2023 OSV News / Our Sunday Visitor, Inc. All rights reserved. Linking is encouraged, but republishing or redistributing, including by framing or similar means, without the publisher's prior written permission is prohibited.