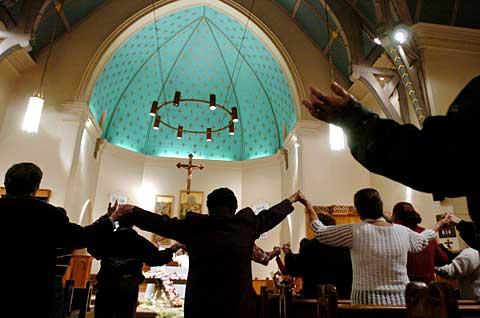 One word comes to mind when Sister of St. Joseph Lorraine Julien is asked to describe Holy Apostles Church: hospitality.

Sister Julien first got acquainted with the Rochester parish after serving with the Sisters of St. Joseph mission in Alabama, where she had grown accustomed to worshipping at a tiny parish 20 minutes away.

After that, Holy Apostles seemed very large and yet felt very welcoming, said Sister Julien, who is now a parish minister there.

“People come and stay connected because they feel warmth and friendliness,” she said. “They feel that they are invited to be part of us.”

Parishioners of Holy Apostles will share more of that hospitality with friends and supporters during a celebration of the parish’s 125th anniversary, which will begin at 10:30 a.m. March 14. A fundraising pasta dinner and dance at the Diplomat Banquet Center on Lyell Avenue will follow at noon and will feature raffle prizes and dancing. Tickets are $15 for adults and $5 for children younger than 10.

Father Tony Mugavero, who became Holy Apostles’ pastor Dec. 30, 2008, said the northwest area of Rochester has undergone many transitions. The neighborhood around the parish has a high concentration of poverty and an array of social challenges.

“As I come here, I see (the parish’s) goodness, beauty and spirituality,” Father Mugavero remarked.

Some parishioners now attending Holy Apostles also were displaced after the closings of Holy Family, St. Anthony of Padua and St. Francis of Assisi churches, which were clustered with Holy Apostles.

“In a certain sense, our feet are just landing on the ground,” Father Mugavero said.

The priest said he spent last year building on the foundations built by former pastor Father Paul Tomasso and other previous pastors. Father Mugavero said he has tried to listen to parishioners, foster leadership and spiritual growth among them, and promote good communication in the parish by encouraging the staff and parish council to read and discuss Stephen Covey’s Seven Habits of Highly Effective People.

He said a parish group was formed to discuss the book My Life with the Saints by Jesuit Father James Martin, and members became very enthusiastic about learning about saints. He encouraged parishioners to dress as saints for All Saints Day and tell other parishioners their life stories. The goal was to get parishioners talking to each other, he said.

“What we are finding is that not everybody knows each other, even though they sit within a few feet of each other,” Father Mugavero noted.

The parish also is planning to get to know its neighbors better. Holy Apostles’ former convent became home to Holy Apostles’ Urban Center in 1998, and the center has a clothing closet and is a distribution site for the Southwest Ecumenical Ministries’ food cupboard. It also is used for faith formation, Hispanic ministry, parish retreats, prayer groups, and a monthly neighborhood supper and Alcoholics Anonymous and Narcotics Anonymous groups.

Holy Apostles’ campus also includes the former priests’ residence, which houses St. Joseph’s Northside, a neighborhood drop-in center run by the Sisters of St. Joseph, and the Youth House, which is the headquarters of the parish’s youth-ministry program.

In addition to its permanent neighborhood ministries, the parish is planning future outreach programs, including ice cream socials, neighborhood faith walks, outdoor Masses and gifts of bread at Easter.

“It’s a very gentle way to invite the neighborhood (to the parish),” Father Mugavero said of these efforts.

“We hope to grow in unity and to serve better this neighborhood that is in such need,” Martinez said. “That’s what we are here for: to serve, and bring the Gospel alive.”

Rose Marie Lombard, the parish’s social-ministry coordinator, said that the parish aims to bring hope and stability to the neighborhood.

Holy Apostles got it start during a time of rapid growth in northwest Rochester. It was the first mission parish of the former St. Patrick’s Cathedral, and the cathedral donated the $1,400 used to buy land to build the original church.

Holy Apostles was so named because it was the 12th parish formed in Rochester. According to parish histories, the parish was incorporated in 1884 and the church, which also functioned as the school, was dedicated in 1885. Due to rapid growth of the parish, a new church was built in 1896 for $40,000. In 1914, a school was built for $65,000.

Within its first 50 years, the parish had grown from its 128 founding families to more than 1,200, Father Mugavero said. During the school’s 93-year history, 101 Sisters of St. Joseph taught there. The school closed in 1978.

One of the school’s graduates, John Fawkes of Rochester, 93, Class of 1930, recalled a time when the neighborhood was centered around the parish.

“Years ago, everybody on Austin Street went to Holy Apostles,” said Fawkes, who served as president of the parish council, the Holy Name Society and on countless fund drives.

“Kids were coming out of Holy Apostles by the hundreds,” he said. “It was kid after kid, boys and girls, hands clasped, and the nuns were right behind them.”