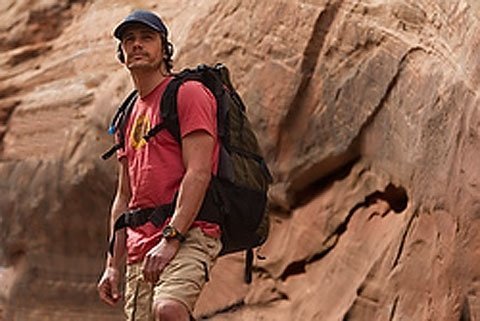 NEW YORK (CNS) — In certain respects, it’s a shame that "127 Hours" (Fox Searchlight) is rated R — although that rating is appropriate, given this fact-based drama’s smattering of adult content and harsh language, as well as its inclusion of a gorily realistic amputation.
?
Yet, with a wider audience, the film might have launched many fruitful discussions with young people about the need for responsible behavior.
?
Though "127 Hours" avoids preaching, it’s as straight up about moral consequences as any Sunday school lesson; it’s also intelligently made and exciting — if also, at times, difficult to watch. So, even with the R rating, and the classification below, mature adolescents may benefit from this account of mountain climber Aron Ralston’s 2003 ordeal following an accident that trapped him in Bluejohn Canyon, a now-widely known landmark near Moab, Utah.
?
To their credit, in adapting Ralston’s 2004 memoir "Between a Rock and a Hard Place," director Danny Boyle and his co-writer Simon Beaufoy don’t try to make Aron (James Franco) appear any smarter than he actually was in getting himself into that terrible situation.
?
Instead, Aron is clearly shown to have been self-centered. And — although able and experienced as a rock climber and canyoneer — Aron neglected the essential safeguard of letting someone else know where he was going, despite several opportunities to do so.
?
Before his descent, for example, we watch as he encounters Kristi (Kate Mara) and Megan (Amber Tamblyn), and the trio shares a swim in a natural pool. But his new acquaintances can’t help noticing that Aron doesn’t make much of an attempt to connect with others.
?
What takes this survival yarn to a deeper level than many others is that — once Aron is squeezed into a slot canyon and immobilized by an 800-pound boulder crushing his right arm — not only his skills but his values, too, come to the fore.
?
Thus he tries a climbing rope to move the rock, uses a knife to chip away at it, narrates his experiences into a small video camera, and doesn’t succumb to panic even as his dwindling supply of food and water runs out. (Oh, and for you nitpickers, near the end, the movie addresses the question of how much good a cell phone would have done him if he’d brought one.)
?
More significantly, while harboring his strength between escape attempts, Aron has a lot of time to reflect on his isolation, on his relationship with a girlfriend who left him, and on the ethics his close and loving family tried to inculcate in him. Sometimes these thoughts take the form of flashbacks; at other times, he hallucinates.
?
But even Aron’s visions, it turns out, have something to teach him — and us.
?
The film contains a harrowing scene of amputation, a nonmarital situation and fleeting rough and crude language. The Catholic News Service classification is A-III — adults. The Motion Picture Association of America rating is R — restricted. Under 17 requires accompanying parent or adult guardian.
?
– – –
?
Jensen is a guest reviewer for Catholic News Service. More reviews are available online at www.usccb.org/movies.