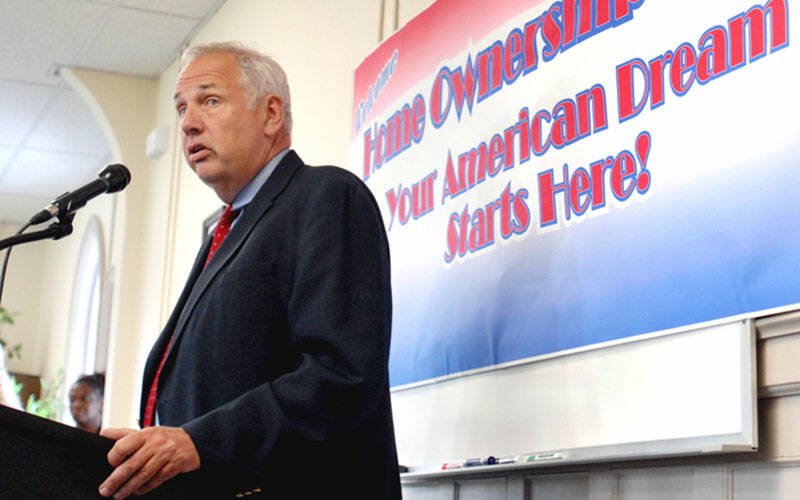 Jack Balinsky, longtime director of Catholic Charities of the Diocese of Rochester, is seen in 2007. (Courier file photo)

Jack Balinsky led Catholic Charities of the Diocese of Rochester for nearly 30 years before retiring in late 2021. Now, Catholic Charities officials are soliciting contributions to a pair of funds established in Balinsky’s honor to help the agency and its subsidiaries continue their work today and into the future.

Gifts made to either fund through the end of December 2022 are being doubled by a matching donor.

The Jack Balinsky Emergency Assistance Fund will provide relief to people who need immediate help meeting such basic needs as food, clothing and housing, according to Karen Dehais, who in January 2022 succeeded Balinsky as executive director of diocesan Catholic Charities.

The Jack Balinsky Endowment Fund, meanwhile, will ensure that Catholic Charities is financially prepared to meet the needs of the people it serves well into the future, she said.

Funds will enable Catholic Charities to meet current needs, provide for the future

Established upon Balinsky’s retirement, both funds have garnered several generous contributions thus far, Dehais said. Recently, an anonymous donor pledged to match contributions made to the endowment fund through the end of 2022, she added.

“It means that anyone who donates to the endowment fund doubles their impact on Catholic Charities,” she said. “Gifts of all sizes are welcome. The anonymous donor will match all funds raised up to a total of $50,000.”

All contributions to the Jack Balinsky Endowment Fund will be invested, Dehais said. Income from the fund will be used to help Catholic Charities to carry out its mission of helping people in the future, as it has been doing for more than a century, she noted.

“Over that history, as needs change, Catholic Charities grows and changes to meet the most important needs at the time. Our commitment to meeting those needs is unwavering, and the Balinsky funds will help Catholic Charities to be well-positioned to respond to whatever is ahead,” Dehais said. “If there’s anything we all have learned in recent years, it’s that changing economic conditions and challenges to people’s health and well-being are going to require Catholic Charities to be ready to meet changing needs in the future.”

Agencies report that needs in their communities have doubled since 2021

Catholic Charities agencies throughout the diocese already are working hard to respond to challenges facing families right now, Dehais added. Several agencies have reported that the need in their areas has doubled since 2021, she said. During 2021, a number of people continued to receive assistance through state and federal pandemic-related aid programs, so they had more resources to use to meet their basic needs, she said. Now, the rising costs of necessities from fuel to groceries exacerbates the situation, she added.

“We all know that every time we go to the gas pump, and every time we go to the grocery store, and now as we get ready to pay our home heating bills, that the cost of everything has risen so much in 2022. Catholic Charities expects that this will drive more people to come to our door seeking our assistance,” Dehais said. “We want to be as well-prepared as possible to meet as many of those needs as we possibly can, and we’re so grateful for anyone that can help us support this fund so we can meet those needs.”

EDITOR’S NOTE: Donations to either of the Balinsky funds may be made online at https://cc.dor.org/donate_jbl/. Donors also may contribute by mailing checks to Catholic Charities’ Jack Balinsky Funds, 1150 Buffalo Road, Rochester, NY 14624.

Tags: Catholic Charities
Copyright © 2023 Rochester Catholic Press Association, Inc. All rights reserved. Linking is encouraged, but republishing or redistributing, including by framing or similar means, without the publisher's prior written permission is prohibited.