2013's disasters: some acts of God, some man-made, some a bit of both? - Catholic Courier 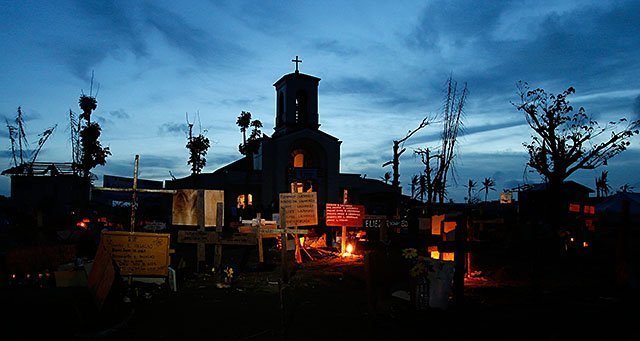 Candles burn at a mass grave outside a church in Leyte province in the Philippines Dec. 16, the start of Simbang Gabi, a nine-day devotional period before Christmas. The markers contain the names of victims of the Typhoon Haiyan. The November super storm killed more than 6,000 people in central Philippines.

WASHINGTON (CNS) — It seemed like 2013 spawned a near-continuous spate of disasters and calamities in the United States and around the world.

Sometimes a disaster struck one area, then roared back to wreak even more damage.

A case in point: On May 20, the Oklahoma City suburb of Moore bore the brunt of an EF5 tornado, killing 24 and injuring more than 200. Eleven days later, the western suburbs of Oklahoma City were hit by another EF5 twister. Nineteen people were killed in the storm and the flooding that followed. The dead included three storm chasers who were doing tornado research.

Or consider the Philippines.

In August, flooding killed eight and left 300,000 homeless around Manila, the capital. In September, Typhoon Usagi, a Category 5 storm, struck in September. A month later an earthquake shook one region of the country, killing dozens. In November, Super Typhoon Haiyan, another Category 5 storm, ravaged a wide swath of the Philippines south of Manila, leaving 5,959 dead, nearly 1,800 missing and more than 27,000 injured, according to figures compiled a month after the storm.

The insurance industry has used the phrase "acts of God" to describe such events. But could the acts of man, not just the hand of God, be a factor?

"The climate scientists have been looking at this for decades now, and been looking at the subject of climate change, and have been speculating, really that the weather, because of the increased heat on the planet that increases moisture, would lead to some bigger weather events, and that would seem to be playing out around the globe," said Dan Misleh, executive director of the Catholic Coalition on Climate Change.

"Some scientists would say you can’t peg any one event to climate change, but it seems these events are getting bigger and more intense, so there does seem to be some correlation," Misleh added. "Which isn’t to say that these big weather events haven’t happened in the past, but it does seem a little more frequent and a little more consistent with what the scientists are saying."

Cyclone Phailin left nearly 9 million people affected along the east coast of India. Phailin hit Oct. 12 with winds of up to 120 mph; it devastated the coastal areas of Orissa and Andhra Pradesh states. Two dozen people were killed; nearly 1 million people were evacuated by the government ahead of the cyclone.

Hurricanes Ingrid and Manuel crashed into Mexico at the same time, Ingrid on the Gulf Coast and Manuel the Pacific Coast, in late September, dumping up to 2 feet of rain. Floods and mudslides in several states claimed more than 100 lives and left thousands homeless.

While the hurricane season in the United States was unusually light, tornado season extended from February to November.

More than 800 homes in Hattiesburg and other parts of southern Mississippi were destroyed or damaged by winds that reached 170 mph Feb. 10. The National Weather Service said the EF4 tornado cut a path that was three-quarters of a mile wide. It cut right through Hattiesburg along a main street. In 2005, the region was devastated by Hurricane Katrina.

A tornado ravaged Granbury, Texas, May 15. The deadly funnel cloud, one of several tornadoes that ripped through parts of north Texas, killed six, injured more than 100, left seven missing and destroyed more than 50 homes and trailers in one subdivision. The tornado that swept through Granbury with winds up to 200 mph was part of a larger weather system generating 10 funnel clouds, thunderstorms and large hail across north Texas.

On May 27, an EF2 tornado decimated two businesses and damaged many properties near Marysville, Kan. The next day more storms struck near Corning, producing EF3 and EF1 tornadoes. There were no fatalities but Father John Reynolds, pastor of St. Patrick Parish in Corning, with a background in meteorology and watching TV images of the power the storms unleashed, he had to see it firsthand to believe it. "The first thing people said was, ‘Everybody survived,’" Father Reynolds said. "Which — when you see this — is really kind of amazing."

The town of Washington, Ill., suffered the last major tornado of the year Nov. 17, as a twister destroyed 1,000 homes. One person was killed and more than 100 were injured. It was the most powerful tornado to hit Illinois in November since 1885.

Despite the spate of tornadoes, Catholic Charities USA’s capacity was not strained as it had been in 2011 and ’12, when Hurricane Irene, Tropical Storm Lee and Superstorm Sandy "pretty much eclipsed anything we had ever seen" since 2005, when Hurricanes Gustav, Ike and Katrina made landfall, said Samuel Chambers, vice president for disaster relief operations.

"Long after the national response is ‘over,’ those (local) communities are still left with whatever resources they have available. Catholic Charities will continue to respond because we have local agencies and affiliates," Chambers said, "as long as resources last."

Chambers reeled off several Southern states in harm’s way of hurricanes. "Now we’re discovering the Mid-Atlantic and the northern regions of the county have to be just as prepared," he said. "Whether it’s relative to global warming or some unexpected chance occurrence, they have to rethink their strategies" so they can build "a more resilient community that is able to respond quicker."

From Sept. 11 to Sept. 15, rains created flooding and rivers that filled homes, tossed buildings, and swallowed infrastructure over an area of 20,000 square miles in northern Colorado. The homes of more than 16,000 families have been damaged or destroyed.

The Shrine of Our Lady of Lourdes in southwest France, known for its healing waters, could not cope with floods in the region that left much of the shrine complex underwater for two days in June — for the second time in eight months.

Floods earlier in June crippled parts of Germany, Austria and the Czech Republic as the Danube, Inn and Ilz rivers reached their highest levels since the 16th century, cutting telephones and power supplies. Two died from the flooding, which caused millions of euros in damage.

When an overseas disaster strikes, "we need to ramp up in these areas: We need to get our crackerjack team up and running, we need to get our fundraising going," said Sean Callahan, chief operating officer of Catholic Relief Services, the U.S. bishops’ international relief and development agency.

"In responding to the natural disasters, because of our expertise," Callahan said, "we find that the turnaround, you can turn it around much quicker and see the positive aspects much quicker. Things in looking a lot better in the Philippines just a month after the super typhoon, In Syria, we’ve been there two years now, and the situation continues to devolve. You get some fatigue of donors, even though the situation continues to deteriorate and you need more and more assistance."

Nineteen members of an elite firefighting unit called the Granite Mountain Hotshots perished June 30 while battling an uncontrolled blaze that threatened the small Arizona towns of Yarnell and Peeples Valley. They were trapped when winds shifted, turning the fast-moving wildfire in their direction. The fire had scorched 8,400 acres and prompted the evacuation of about 1,000 residents of the two towns. More than 200 structures were destroyed, many of them homes.

A bigger wildfire earlier in June elsewhere in Arizona destroyed everything but the rock walls of Our Lady of the Sierras Marian Shrine, a hillside chapel in Hereford. But the heat from the fire turned the rock walls into a blast furnace, rendering the ciborium and pyx at the shrine blackened and virtually unrecognizable. This wildfire claimed more than 27,000 acres and 65 homes.

Then there’s the case of man-made disasters.

A massive explosion April 17 followed by a fire at a fertilizer plant in the Texas town of West killed 15, including first responders, and injured 200. The explosion cut a six-block swath of destruction across the town of 2,800.

An unattended runaway train barreled into Lac-Megantic, Quebec, July 6. The derailed train’s tanker cars, filled with crude oil, exploded and incinerated much of the downtown. Fifty people were killed and 30 buildings were destroyed.

Just five months after a November 2012 fire at the Tazreen garment factory outside the Bangladeshi capital of Dhaka claimed 117 lives and injured more than 200, an eight-story commercial building collapsed in a Dhaka suburb — on April 24. Called Rana Plaza, it was used by companies making garments for Western clothing companies and retailers.

The search for the dead ended May 13 with a death toll of 1,129, with another 2,515 injured rescued from the building’s wreckage.

It is considered to be the deadliest garment-factory accident in history, as well as the deadliest accidental structural failure in modern human history.