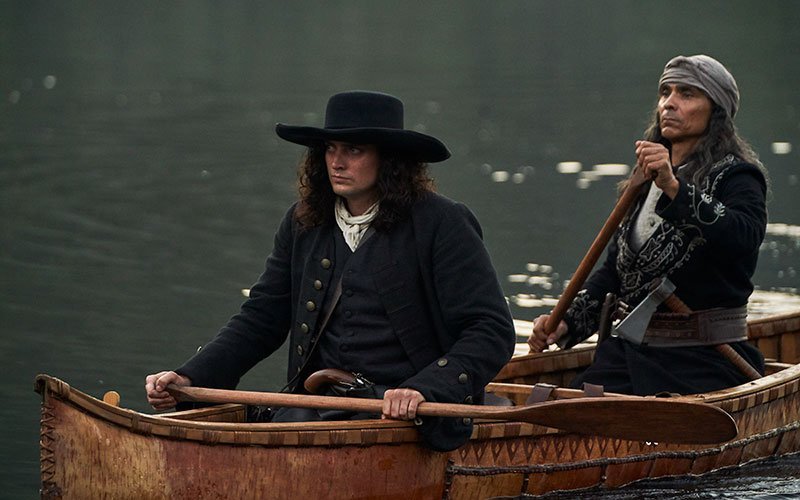 By turns brutally violent and excessively talky, the eight-hour historical drama premieres with back-to-back episodes on National Geographic Monday, May 25, 9-11 p.m. EDT. It will air in that slot on consecutive Mondays through June 15.

Proulx also executive-produced the drama, which Elwood Reid created. Reid developed his narrowly focused screenplay, on which he collaborated with Sheri Holman and Jason Sack, from the much more ambitious 700-page tome.

Spanning 300 years and multiple continents, the book follows several generations descended from Rene Sel (Christian Cooke) and Charles Duquet (James Bloor), indentured servants in 17th-century New France, the Francophone colony in Canada. The series, by contrast, limits itself to life in the settlement of Wobik, near Quebec.

As Sel and Duquet arrive there by boat along the St. Lawrence River in 1693, they’re met by a stark and arresting image: about 10 Iroquois men strung up on a crosslike tree. Vultures pick at their lifeless bodies.

Haunted by a traumatic past, another of the voyagers, Delphine (Lily Sullivan), crosses herself as their vessel passes this grim scene. Delphine is a so-called “fille du roi” (daughter of the king). These were young women sent from the old country to domesticate the frontiersmen of French Canada.

Just as optimistic Rene and the easily discouraged Charles become linked, so too do passive Delphine and a more calculating “fille,” Melissande (Tallulah Haddon). These pairs of newcomers play important narrative roles.

But the show really centers on the powerful men and interests involved in the struggle between the French and the interloping British for control of the region’s vast forests. These are personified by wealthy landowner Claude Trepagny (David Thewlis).

Trepagny hires Rene and Charles to clear his land and build him a “sky table” (essentially a refined version of a treehouse). This, he feels, will bring him closer to the “vault of heaven.” Marriage to a fille will complete his vision.

Rene does Claude’s bidding, but Charles deserts to align himself with scheming English barrel maker Elisha Cooke (Thomas M. Wright). It was Cooke’s attempts to turn the Iroquois against the French that led to the massacre at the story’s outset as excitable Capt. Bouchard (David Wilmot), the local constable, made use of capital punishment to set an intimidating example.

Catholic religious orders play a prominent role in the story. Mother Sabrine (Leni Parker), for example, whose community is not specified, administers a kind of finishing school for the filles, assuring them: “Follow my rules and I’ll steer you toward godly and prosperous husbands.”

Jesuit missionaries, known to the indigenous people as “Black Robes,” served in New France from the early years of the 17th century until the suppression of their order in 1773. In “Barkskins,” they find themselves caught up in the Anglo-French power struggle and subject to the wrath of the Iroquois.

The show’s depiction of the Jesuits’ relationship with First Nations people is oversimplified and unbalanced. It virtually ignores the positive contributions the clerics made to these communities.

Still, the program’s setting will be of interest to U.S. viewers, many of whom may be unfamiliar with Canada’s early history. “Barkskins” also successfully portrays the rough-and-ready atmosphere of an untamed frontier.

The historical context justifies at least some of the mayhem the series includes. And the script does attempt to mitigate much of its impact on the audience. But as knives slash, axes plunge and the body count mounts, “Barkskins” becomes difficult to watch.

Additionally, the program contains some vulgar language, implied nudity and discussions of sexuality, including the description of an assault. An incidental, unfortunate attempt to end a pregnancy, though it’s neither condemned nor endorsed, is shown to lead to tragedy.

Taken together with the high level of violence, these elements may be too much even for most adults. Those grown-ups who do steel themselves to tune in, moreover, will face the aesthetic hurdle presented by the dialogue’s exhausting prolixity. Though intriguing at first glance, “Barkskins” turns out to be a harsh and wearing slog.