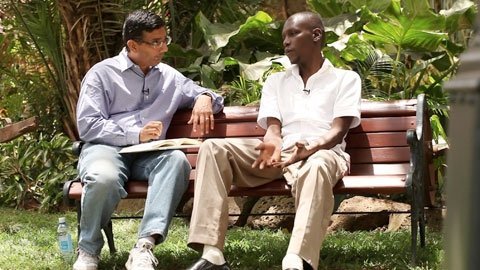 NEW YORK (CNS) — “What does Barack Obama believe?” asks right-leaning scholar Dinesh D’Souza, narrator of the engaging political documentary “2016: Obama’s America” (Rocky Mountain). The film — which D’Souza also co-directed and co-wrote with John Sullivan — is based on his 2010 best-seller “The Roots of Obama’s Rage.”

Thankfully, the answer that emerges onscreen is not a hysterical rant about birth certificates and college transcripts. Instead we’re provided with a studied — if obviously partisan — analysis of the president’s early life and influences. The conclusions drawn from this examination, however, are both radical and questionable.

D’Souza uses the 44th chief executive’s 1995 memoir “Dreams From My Father: A Story of Race and Inheritance” as his starting point for a globetrotting journey in search of Obama’s intellectual roots. What he claims to discover is a heritage of extreme anti-colonialism passed down from the president’s Kenyan father, Barack Obama Sr.

While the Indian-born scholar does show convincingly that the current incumbent in the White House was heavily influenced by his father in many ways, to assert that the president must therefore necessarily share his deceased dad’s militant views is a stretch, to say the least. To arrive at this finding, moreover, D’Souza resorts to some rather unconvincing pseudo-psychology.

D’Souza also makes provocative allegations regarding the people he calls Obama’s “Founding Fathers” — the various scholars and thinkers the president himself identifies as having helped to mold his outlook.

They include writer, journalist and labor activist Frank Marshall Davis (1905-1987). D’Souza alleges that Davis, whom the future president apparently mentions more than 20 times in his memoir, was (to coin a phrase) a card-carrying member of the Communist Party.

Perhaps inevitably, D’Souza once more raises the specter of the Rev. Jeremiah Wright, pointing out that this sometimes-fiery advocate of black liberation theology married Barack and Michelle Obama and baptized their two children.

Most viewers are likely to come away from D’Souza’s fairly slickly produced movie holding precisely the same view of the president they did going into it. Conservatives will be delighted, liberals will be offended and the majority of independents will probably remain unswayed.

Yet the shy and likable D’Souza’s tone is never uncharitable. And his alarm about the future of the nation under a second Obama administration, however subject to factual and logical critique, seems at least to be sincere.

The film contains adult themes and a single expression that could be construed as profane. The Catholic News Service classification is A-II — adults and adolescents. The Motion Picture Association of America rating is PG — parental guidance suggested. Some material may not be suitable for children.