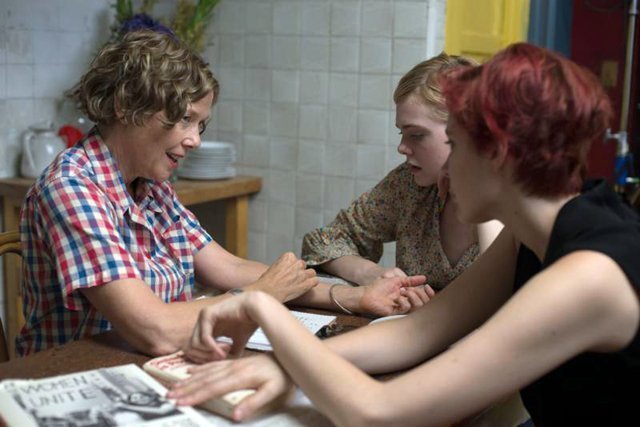 NEW YORK (CNS) — The moral compass in "20th Century Women" (A24), writer-director Mike Mills’ rambling, unfiltered drama — loosely based on his adolescence in 1970s Santa Barbara, California — is not one of the characters. Rather, it’s President Jimmy Carter.

Specifically, the film makes use of Carter’s sermon-like "Crisis of Confidence" address, usually mislabeled as his "malaise" speech. In it, he admonished America: "In a nation that was proud of hard work, strong families, close-knit communities and our faith in God, too many of us now tend to worship self-indulgence and consumption. Human identity is no longer defined by what one does but by what one owns."

This drones out of a TV set with the wallop of a Shakespearean soliloquy. The principal characters up to that point have been indulging themselves as if their lives depended on it, only they’ve been calling it self-realization. They’re suitably chastened, if only momentarily.

Overall, the movie is more a nearly plotless collection of whimsy than a fully realized story. So whatever insight Carter provides quickly evaporates.

Mills takes an affectionate look back at his world, circa 1979, with well-meaning if slightly confused women attempting to steer his stand-in, 15-year-old Jamie (Lucas Jade Zumann), in the general direction of sensitive adulthood with their nascent feminist ideals as their guide.

They rely heavily on the self-help literature of the time. All the adults, even the ones engaging in nonmarital bedroom activities, are intensely curious about sex but don’t derive much pleasure from it. Instead, they find it eternally perplexing.

Dorothea (Annette Bening), Jamie’s divorced mother, prides herself on being open-minded but retains a faint sense that romance was better decades earlier. As Jamie keeps explaining to others, "She’s from the Depression."

Dorothea has the notion that Jamie will become a better man if he’s advised by his 17-year-old friend, Julie (Elle Fanning), who has nonsexual sleepovers with Jamie, and 24-year-old Abbie (Greta Gerwig), the photographer and punk-rock devotee who rents a room in their ramshackle Victorian house — a structure that’s in a perpetual state of renovation.

Jamie helps Julie through a pregnancy scare and Abbie through a bout with cervical cancer that she fears will leave her unable to bear children. Dorothea, meanwhile, chain-smokes, explaining that she’s unlikely to come down with a fatal disease from it, since she began when smoking was considered fashionable.

There are several visits to a grungy rock club. And lengthy discussions of the quality of groundbreaking bands are mingled with talk of humanity’s role in the cosmos as well as the responsibility men bear toward women.

Everyone, including William (Billy Crudup), the handyman, who is occasionally drawn into the sexual situations, is determined to make moral decisions in the face of whatever obstacles they encounter. All of this makes "20th Century Women" a road trip in the company of pleasantly sensitive, albeit ethically clueless, companions. If only they had the vagust notion of their destination.