21 and Over - Catholic Courier 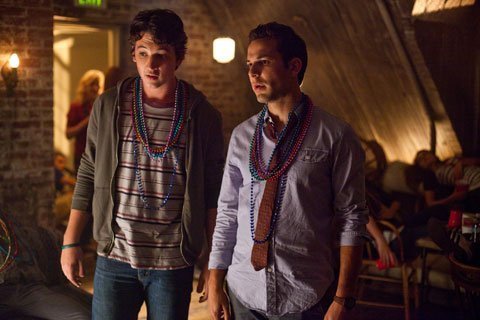 NEW YORK (CNS) — When a film bills itself as, "From the writers of ‘The Hangover,’" it’s a safe bet that morality and good taste won’t be part of the mix. And so it proves with the comedy "21 and Over" (Relativity).

Indeed, scribes Jon Lucas and Scott Moore, who also directed, produce a veritable raunchfest — a younger (and, if possible, more obscene) version of the 2009 film (which spawned a 2011 sequel).

Subtlety is not their strong suit, and "21 and Over" is an assault on all the senses, including that of decency. The humor ranges from gross-out moments (think projectile vomiting) and crude sex jokes to racist and homophobic remarks.

The setting is a party-hearty university in Washington state where, needless to say, no one ever goes to class.

Problem is, Jeff has a crucial medical school interview in the morning, arranged by his domineering father (Francois Chau). So he resolves to stay home.

But Miller, the free spirit of the trio, won’t take no for an answer. "This is your 21st birthday," he tells Jeff. "This is the day you become a man."

In Hollywood terms, that means drinking yourself blind, getting naked, urinating on your friends, watching lesbians have sex … you get the picture.

When Jeff blacks out (his pledge to have just one beer doesn’t last long), Miller and Casey embark on an all-night odyssey to return him home and sober him up for the interview. There’s just one obstacle: They don’t know where he lives.

Suffice it to say that the road home passes through several bars, drug-laden parties, and sorority houses, where one nubile blond (Sarah Wright) takes pity on the revelers and lends a helping hand.

The surprisingly soppy ending to "21 and Over," which carries a sentimental message about friendship, in no way mitigates the tsunami of filth and debauchery that has just washed over the audience.