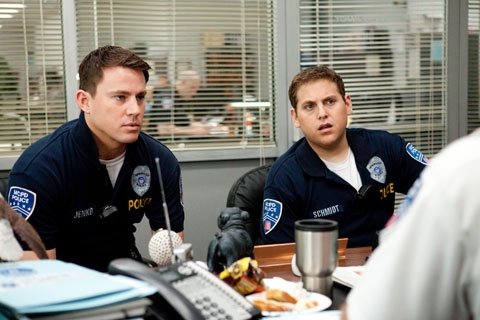 NEW YORK (CNS) — The childish desire to be outrageous, which currently seems to be the driving motive of most Hollywood humor, derails yet another comedy with "21 Jump Street" (Columbia).

Co-directors Phil Lord and Christopher Miller’s big-screen version of the once-popular television series — which first aired on Fox in 1987 — starts out as a good-hearted, albeit relentlessly foul-mouthed, buddy study. But, as the vulgarities continue to fly, that apparently irresistible urge to shock leads to scenes of gruesome violence and debased sexuality.

The pals in question are two bungling police partners: sharp but uncoordinated Schmidt (Jonah Hill) and athletically gifted dim bulb Jenko (Channing Tatum). Once schoolyard enemies, the nerd and the jock bonded at the service academy where they discovered they could use their complementary talents to mutual advantage.

Their ties are strained, however, when — in accordance with the premise of the TV show — the relatively youthful looking duo find themselves assigned to pose as high school students in an undercover operation designed to bust a drug ring.

Adolescent society, it seems, has changed: Jenko’s don’t-care, don’t-try, laugh-at-the-losers sensibility is no longer considered cool by the crunchy-granola elite who treasure tolerance above all. So Schmidt is suddenly a hipster, while Jenko is consigned to the company of science nerds.

The every-sentence frequency of the F-word aside, so far so good. But things take a morally troublesome turn when our heroes decide to throw a party for their fellow students, blithely supplying their newfound, indisputably underage, chums not only with liquor but with marijuana as well. And the decadence spreads to an upstairs bedroom where we glimpse something unnatural we’re supposed to find funny.

Schmidt and Jenko’s investigation, moreover, leads them into ever more violent confrontations. Like the aforementioned act of perversity, the sheer extremity of the eventual bloodletting, and the nature of some of the resulting wounds, is clearly meant to amuse.

Viewers of faith will earlier have been made uneasy by an ambivalent treatment of religion. The titular address — from which the covert program is being run — is an abandoned church that was once home to a congregation of Korean-Americans.

Before setting out on his assignment, Schmidt pauses to offer a confused, but seemingly sincere prayer before the church’s altar, only to be mocked by Jenko and told by his commanding officer (Ice Cube) to leave "Korean Jesus" alone.