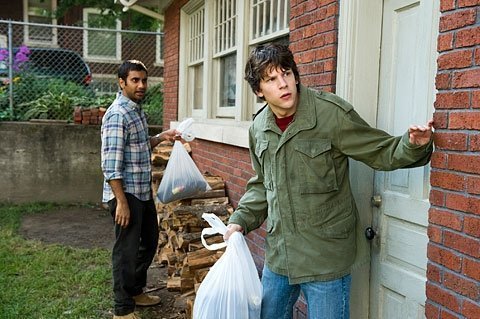 NEW YORK (CNS) — As slight as it is seamy, the action-comedy "30 Minutes or Less" (Columbia) reunites the director and star of 2009’s well-received — if violent — horror satire "Zombieland."

Joining filmmaker Ruben Fleischer and lead Jesse Eisenberg are standup comic Aziz Ansari (also of the NBC sitcom "Parks and Recreation") and actor Danny McBride (from the HBO series "Eastbound and Down").

The lewd movie that results from their collaboration amounts to a vehicle for the respective comedic "stylings" of these two latter performers, which — as evidenced by their approach to the recurring theme of male underachievement — share a distinct strain of sophomoric crudity.

Eisenberg plays Nick, a pizza deliveryman in Grand Rapids, Mich., who is kidnapped by McBride’s character Dwayne and his dim-bulb sidekick Travis (Nick Swardson). Hoping to raise money to pay for a hit on Dwayne’s domineering, ex-Marine father (Fred Ward) — known as The Major — the bumbling criminals strap a homemade bomb to Nick and order him to rob a bank.

Ansari’s signature, stream-of-consciousness discourse yields several clean chuckles, but the majority of what transpires is vulgar in the extreme. Along with offensive language and demeaning sexual banter, Michael Diliberti and Matthew Sullivan’s screenplay is littered with movie references intended to appeal to the male 18-30 demographic.

The title refers to the amount of time Nick has to deliver a pizza before it’s free. But it also applies to the movie itself since "30 Minutes or Less" would barely warrant a half-hour runtime. No doubt, even that brief smattering of this inane shtick would come as an unpleasant surprise for many unsuspecting patrons.