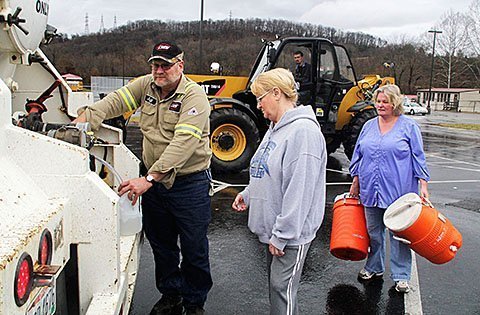 Residents fill up containers with water at an emergency distribution center in Poca, W.Va., Jan.11. A federal disaster declaration has been issued for a West Virginia chemical spill that may have contaminated tap water and prompted officials to order residents in nine counties not to use tap water to bathe, brush their teeth or wash their clothes.

WHEELING, W.Va. (CNS) — Bishop Michael J. Bransfield of Wheeling-Charleston asked the state’s Catholics to join him in praying for the 300,000 people affected by the Jan. 9 chemical spill in the southern region of the state.

He asked for the prayers during the televised Mass he celebrated Jan. 11 at the Cathedral of St. Joseph in Wheeling, noting the many people who were still suffering in Charleston and the surrounding area who had not had access to clean water for days.

"We pray for those affected by the disaster that has fallen upon Charleston and nine counties in the south where people are without water, and we pray for those who are working hard to make sure that it reaches them," Bishop Bransfield said at the beginning of the Mass. "I ask you all to please join me in praying for them."

The disaster occurred when a chemical used in the coal preparation process leaked from a tank at a Freedom Industries facility into the Elk River, which flows into the Kanawha River through Charleston.

A Jan. 12 AP story quoted the company’s president, Jeff McIntyre, as saying the ban on using water would be lifted zone by zone but he didn’t know when that could begin.

Bishop Bransfield said that when a disaster like that occurs it always takes the hardest toll on those who are most vulnerable, especially those living in remote areas of the region.

He commended the many people from Catholic Charities West Virginia, the Federal Emergency Management Agency, or FEMA, as well as priests and laity from Charleston-area parishes and many others working to assist those in need by providing bottled water and other assistance.

"We ask the Lord to have this burden lifted quickly," Bishop Bransfield said in his homily. "We pray for those who do not have access to water and we give thanks for those who are working to make sure they get it and for taking care of those affected.

"There are so many trying to help — from our Basilica of the Co-Cathedral of the Sacred Heart in Charleston, the people of Catholic Charities, those working in hospitals and with FEMA," he added. "We thank them and pray for them, and we pray for those still suffering."

Rowan is editor of The Catholic Spirit, newspaper of the Diocese of Wheeling-Charleston.