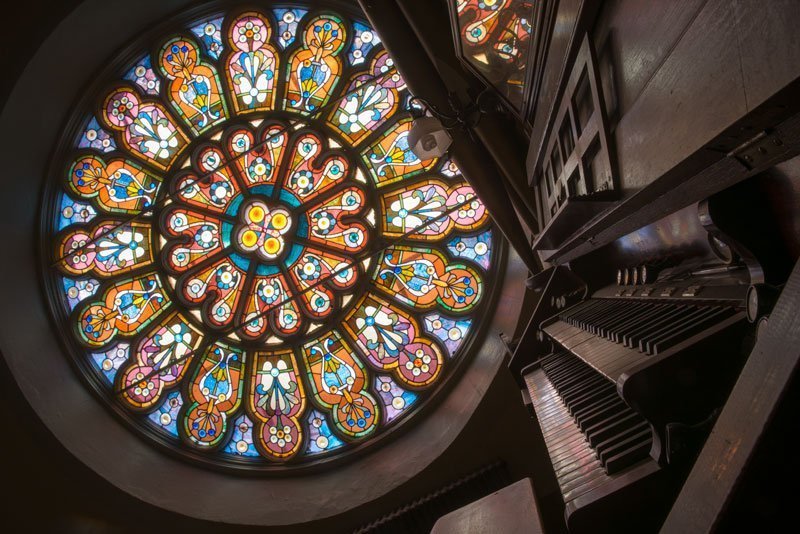 Between 2004 and 2010, the 18 churches of the Rochester Diocese’s West Deanery — covering Steuben and parts of Livingston, Monroe and Ontario counties — formed into two clusters and four consolidated parishes. Its dean is Father Stephen Karani, pastor of Holy Family Catholic Community in Wayland.

Holy Family Catholic Community comprises three worship sites in northern Steuben County as well as one in southern Livingston County. The parish was formed in 2004.

‚Ä¢ Sacred Heart of Jesus, founded in 1838, is the oldest faith community in the Rochester Diocese outside of Monroe County. Early Masses were celebrated in a log cabin until a new facility opened in 1850 to serve the Catholics of Perkinsville. The current church was dedicated in 1884 at 11119 Chapel St.

‚Ä¢ Established in 1881 for worshipers of mostly German extraction, St. Joseph in Wayland is in the northwest corner of Steuben County. A church was dedicated the year of the parish’s founding, and that structure, at 206 Fremont St., stands as the only church building in St. Joseph’s history.

‚Ä¢ St. Mary in Dansville opened its first church on Franklin Street in 1845, serving a mostly German-immigrant population. Seventy years later, the current St. Mary Church was constructed and dedicated at 40 Elizabeth St. Among Holy Family’s four worship sites, St. Mary is the only one in Livingston County.

‚Ä¢ St. Pius V was founded with the opening of its first church in 1861 — thus alleviating a lengthy hike to Perkinsville for Mass. At that time, the Village of Cohocton was then known as Liberty. The original church fell victim to fire in 1918, but a new one was completed that same year. It remains today at 35 Maple Ave.

Our Lady of the Valley

Catholics in western Steuben County are served by two faith communities — one in Hornell and the other in Rexville — that have operated as one parish since 2004.

‚Ä¢ St. Ann was founded in 1849 with the opening of its first church in Hornell. The faith community’s present-day church has been in existence for nearly 150 years, having opened in 1869 at 31 Erie Ave. In 2001 St. Ann established a perpetual-adoration chapel; it is one of only two in the Southern Tier, with the other being at St. Casimir in Elmira.

‚Ä¢ St. Mary, near the Pennsylvania border, dates back to 1845; its first church opened in 1846 in Greenwood. A new church was dedicated in 1875 in Rexville but two years later it burned, to be replaced in seven months’ time. That church also was lost to fire in 1981. The current facility on Church Street opened in 1984.

This three-church cluster in Avon, Honeoye Falls and Lima was formed in 2010, covering northern Livingston County and southern Monroe County.

‚Ä¢ For nearly 150 years, St. Paul of the Cross has served Catholics in the Village of Honeoye Falls. The faith community was founded in 1869 when its first church was dedicated. The current church, at 31 Monroe St., opened in 1940. One pastorate of note was Father Martin Cluney’s, which spanned some 46 years (1890-1936).

‚Ä¢ The year 1842 saw the first Mass held in the Town of Lima, with St. Rose Parish being founded in 1848. The parish’s first church was completed in 1849, and an addition was made only two years later due to the rapid influx of area Catholics. A new St. Rose Church — the current one — was dedicated in 1873 at 1985 Lake Ave.

‚Ä¢ Honeoye’s St. Mary was founded in 1868 in what was then known as Honeoye Falls. The parish was made up mainly of Irish families during its early years. Masses were celebrated over a store and in a schoolhouse before the first church opened in 1876. St. Mary’s present-day church was erected in 1958 at 8961 Main St.

‚Ä¢ The roots of St. Matthew Parish extend back to 1876 when St. William Parish formed in Conesus. Another Conesus Lake-area parish, St. Joseph in Livonia, was incorporated in 1910. In 2004, the neighboring parishes became one with the founding of St. Matthew, housed in a new church at 6591 Richmond Mills Road in Livonia.

‚Ä¢ Holy Angels got its start in the 1840s, when Masses were celebrated for a growing group of Irish Catholics in the Town of Nunda who had gotten jobs constructing the former Genesee Valley Canal. Holy Angels’ first church opened in 1854, and the new — and current — church structure was built in 1872 at 45 N. Church St.

‚Ä¢ St. Lucy in Retsof was established in 1911, when a converted school building became the worship site for a congregation of mostly Italian immigrants laboring in area salt mines. The first liturgy to be celebrated in St. Lucy’s present-day church, at 2770 Retsof Ave., was its midnight Christmas Mass in 1964.

‚Ä¢ St. Mary in Geneseo was founded in 1854 when its first church building went up that year. Previously, Masses were held in the local concert hall and courthouse. St. Mary’s current worship facility was dedicated in 1889 at 4 Avon Road. The church is a short distance from SUNY Geneseo in this noted college community.

‚Ä¢ Masses were celebrated in the Village of Mount Morris as far back as the late 1830s. As Irish immigrant Catholics arrived in the area, the first church for St. Patrick went up in 1850. The present-day church was dedicated in 1874 at 46 Stanley St., close to Letchworth State Park and the Catholic Charities of Livingston County office.

‚Ä¢ Catholics in Leicester founded St. Thomas Aquinas in 1897 to accommodate Catholics in the area’s growing farming industry. That year, the only church in St. Thomas Aquinas’ history was dedicated — yet the building at 175 Main St. has actually existed since 1844, when it was built by a former Baptist congregation.

With histories reaching back to the mid-1800s, two Steuben County churches clustered in 2010 and became a single parish two years later.

‚Ä¢ St. Gabriel was founded in 1848 in a former Presbyterian church. A new church opened in 1885 before it burned down in 1908, but another structure went up one year later. That church, at 78 Shethar St., is attended by year-round Hammondsport residents as well as summer visitors and residents from nearby Keuka Lake.

‚Ä¢ Eight miles to the south of St. Gabriel, St. Mary in Bath was founded in 1850 as a mission parish with the opening of its first church. A new, much larger church building was dedicated in 1892 — and that same St. Mary structure, at 32 E. Morris St., continues to serve Catholics today in the central portion of Steuben County.