7 to be ordained deacons May 27 - Catholic Courier 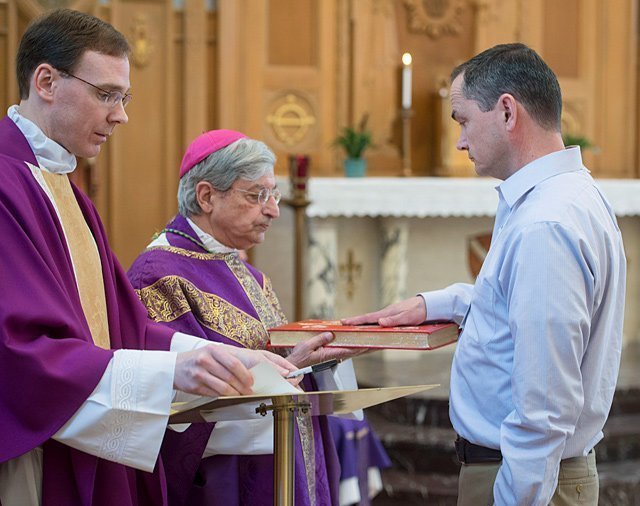 Dermot Loughran, who will be ordained to the permanent diaconate May 27, made his profession of faith and oath of fidelity to Bishop SalvatoreR. Matano during daily Mass April 10 at the diocesan Pastoral Center in Gates.

Bishop Salvatore R. Matano will ordain seven men as deacons later this month — six to the permanent diaconate and one as a transitional deacon on the path to priestly ordination in 2018.

The ordination Mass will be take place at 10 a.m. May 27 at Sacred Heart Cathedral, 296 Flower City Park, Rochester.

The six permanent deacons have completed studies at St. Bernard’s School of Theology and Ministry and will receive master’s degrees in pastoral studies. The one transitional deacon is studying at Theological College Seminary in Washington, D.C.

After working in business and finance for 31 years, James Briars, 57, left the secular world to enter church ministry. In October, while he was studying for his final year in preparation for the diaconate, Briars said his pastor, Father Paul Bonacci of St. Pius Tenth in Chili, approached him about becoming the parish’s pastoral associate. With Father Bonacci’s blessing, Briars started in that position in December.

Briars and his wife, Patricia, have two children and one grandchild. He said it was his family who encouraged him to consider the diaconate.

“They have been exceptionally supportive,” he said. “It has been uplifting.”

Jeffrey Chichester, 42, is this year’s only transitional deacon, looking forward to priestly ordination next year.

“However, transitional or permanent, we all share the same ministry,” Chichester observed of the diaconate.

A native of Mount Morris, Livingston County, and a parishioner of St. Luke the Evangelist Parish in Geneseo, Chichester earned a bachelor’s degree in biology from SUNY Geneseo. He was working on a graduate degree in terrestrial ecology and had worked as a field naturalist before beginning formation for the priesthood.

He served at St. Mary and Ss. Mary and Martha parishes in Auburn during his pastoral year in 2015-16. Following his diaconal ordination, he will serve a summer assignment in the diocese before returning to Washington to finish his final year of seminary.

“This (last) year (of seminary) is going to fly by so quickly, and I’m just looking forward to that wonderful day that I’m ordained to the priesthood,” he said.

De Risio was confirmed through the Rite of Christian Initiation of Adults program at St. Joseph Church in Penfield in 2008-09. After being initiated into the Catholic Church, he became apart of the parish’s RCIA team.

For the past 29 years, he has worked at Harris Corp. in Rochester, where he is currently a project manager. He and his wife, Corali Marcela, have two children and one grandchild.

James Fien, 54, said his call to the diaconate began about 15 years ago. At the time, he was traveling quite a bit for his job and was away from his wife and kids.

“I realized my greatest gifts in life were given to me by someone I didn’t know that well,” he explained. “As I learned more about my faith, I recognized God working in my life in more ways than I recognized at the time.”

Fien holds a bachelor’s degree in business from St. Bonaventure University and is a national accountant manager for Equifax Inc.

Fien spent his diaconal field experience at Bethany House, Church of the Assumption in Fairport, and ministering to residents at Aaron Manor Nursing Home and the Fairport Baptist Homes. He also spent last summer shadowing at Our Lady of Lourdes Parish in Brighton and St. Ann’s Community in Rochester, helping with a variety of ministries there.

He and his wife, Christine, live in Fairport and belong to Church of the Assumption. They have two children and one grandchild.

“I’m looking forward to interacting with new people, God’s people, and doing whatever God presents to me,” he said of his upcoming ordination.

Timothy Hebding, 62, said it was the late Deacon Edward Sergeant, a parish deacon at Our Lady of the Lakes Catholic Community in Penn Yan, who planted within him the seed of a vocation to the diaconate.

“(He) kept giving me applications to fill out. I took it to heart after he passed away (suddenly in 2011) that I should get the paperwork filled out and get this going,” he said.

Hebding holds an associate’s degree in math and science, and an associate of applied science degree in ornamental horticulture landscape from Finger Lakes Community College, as well as a bachelor’s degree in biology from St. John Fisher College. He is a warehouse manager and hazardous material officer at Southpoint Photo Imaging Supplies in Rochester.

Hebding and his wife, Therese, live in Naples and belong to Our Lady of the Lakes Catholic Community. The Hebdings have four boys and 10 grandchildren.

Dermot Loughran, 46, said his family has been supportive of his call to the diaconate. Loughran and his wife, Janene, have six children ranging in age from 2 to 16, and will welcome their seventh child in November.

Loughran said his call to the diaconate became clear in 2011 with the birth of his fifth child, John Paul, who was born with Potter’s syndrome, a rare and almost always fatal condition in which a fetus develops without amniotic fluid. During John Paul’s one hour of life, Loughran was able to baptize his son. In emergency situations, when death may be imminent, laypeople are allowed to administer the sacrament.

“It was through the baptism of John Paul at the hospital ‚Ä¶ that I developed a strong bond to the sacraments and, with the addition of prayer in front of the Blessed Sacrament, that I developed the call to the diaconate,” Loughran said.

Loughran holds a bachelor’s degree in art history at the College of Holy Cross in Worcester, Mass., and master’s in business from Nazareth College. He works for Fiserv, a Fortune 500 company that specializes in technology for the financial industry.

“I’m looking forward to drawing people into a closer relationship with the Eucharistic,” he said of his future ministry as a deacon.

Serving the church is something of a family affair for Jeff Serbicki. His wife of 40 years, Darlene, is an administrative assistant in the diocesan office of Clergy Services, and their son, Daniel, is a priest in the Diocese of Buffalo. Serbicki will be vested by his son during the diaconal ordination.

“I’m tearing up just thinking about it. (Having my son vest me), it is incredible,” he said. “He has been praying for me at every step along the way.”

The Serbickis are members of St. Leo Church in Hilton. They have four other children and two grandchildren. Serbicki, 61, holds an associate’s degree in science laboratory technology from Mohawk Valley Community College and is a principal materials engineer at Memjet in Rochester. He spent his diaconal field experience at Heritage Christian Services and Monroe Community Hospital.

“It’s been a transformative experience,” he said of preparing for the diaconate. “I’m a different person spiritually and emotionally than when I went in.”