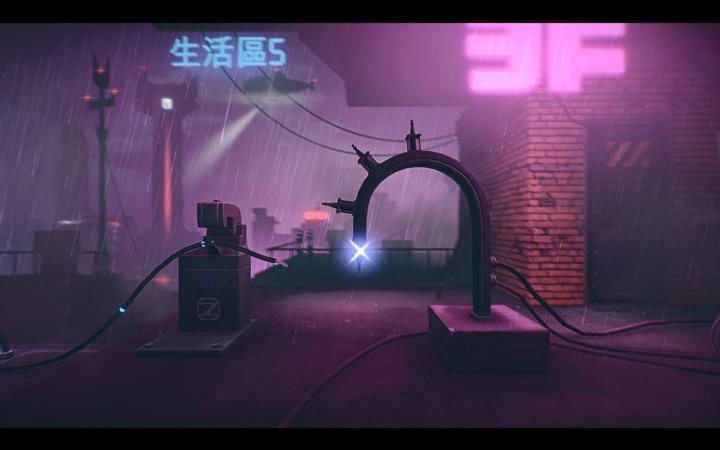 This is an image from the video game "7th Sector." (CNS photo by Sometimes You)

NEW YORK (CNS) — The iconic “Ghost in the Shell” anime was premised on the idea that a human consciousness could reside in a cybernetic body. A similar concept underlies “7th Sector” (Sometimes You) where players take on the role of a character who travels as a spark of energy.

In that guise, the gamer explores the futuristic city of Novograd and the dark underbelly of an Orwellian society where technology is the weapon of the privileged few. Dystopian themes and occasional violent elements render the game unsuitable for youngsters. Still, the mayhem on display in “7th Sector” is minimal, in keeping with the nature of puzzle video games.

Detailed, unique backdrops contribute to an immersive atmosphere, each new scene contributing to the overall history of what went wrong in this fictional world. Even without dialogue or voiceovers, “7th Sector” manages to create an incredibly enriching and evocative gaming experience.

To keep progressing across Novograd, players — who begin as a shadowy figure trapped within a static-filled TV screen before becoming that on-the-move spark — must figure out a variety of exceptionally arduous puzzles. Yet their very difficulty makes the experience of ultimately solving these challenges that much more rewarding. They include exercises in logic, mathematics and physics.

The manual dexterity required to achieve some of the game’s objectives can, however, prove a source of frustration. Thus gamers may have to press a button at a precise moment — which could be difficult for those with physical limitations.

There are also minor technical shortcomings to the design. Camera angles, for instance, cannot be controlled, leading to the occasional wonky view. Additionally, “7th Sector” was originally written in Russian, and not all the English translations are on-target.

Players’ choices can result in four different endings, all of them reflective of the kind of pressure humans are under when facing inequality and oppression. There’s an unusual philosophical depth to “7th Sector” that’s also unexpected, given its genre.

For those seeking a stimulating and story-rich adventure, “7th Sector” can be highly recommended, despite a few technical lows.

The game contains some violence with occasional blood graphics and a suicide. The Catholic News Service classification is A-II — adults and adolescents. The Entertainment Software Rating Board rating is T — teens.