A bishop has many responsibilities - Catholic Courier 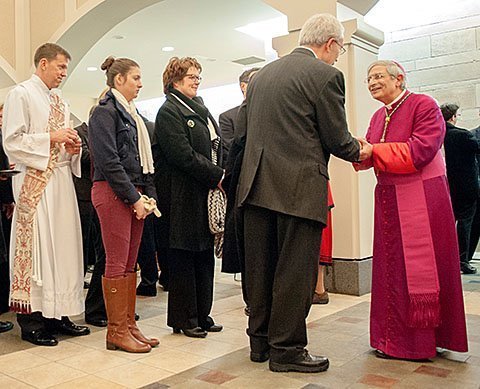 Bishop Salvatore R. Matano talks with local Catholics after solemn vespers at Sacred Heart Cathedral Jan. 2. As shepherd of the diocese, a bishop is called to be present in parishes and the wider community. (Courier photo by Mike Crupi)

“Ultimately, the job of the bishop is to be an exemplar of the Christian life,” observed Father Daniel Condon, a canon lawyer and chancellor of the Diocese of Rochester.

According to Canon 375, “Bishops … are constituted pastors in the Church, so that they are teachers of doctrine, priests of sacred worship, and ministers of governance.” The bishop is the spiritual leader of his diocese, and his chief role is that of shepherd, added Father Joseph Hart, who will serve as vicar general and moderator of the curia under Bishop Salvatore R. Matano after more than a decade in those roles under Bishop Emeritus Matthew H. Clark.

Canon 383 specifically says that a bishop must “show himself concerned for all the Christian faithful entrusted to his care, of whatever age, condition, or nationality they are, whether living in the territory or staying there temporarily; he also is to extend an apostolic spirit to those who are not able to make sufficient use of ordinary pastoral care because of the condition of their life and to those who no longer practice their religion.”

The same canon further states that a bishop should “act with humanity and charity toward the brothers and sisters who are not in full communion with the Catholic Church and is to foster ecumenism as it is understood by the Church. He is to consider the nonbaptized as committed to him in the Lord, so that there shines on them the charity of Christ whose witness a bishop must be before all people.”

As the exemplar and shepherd, the bishop’s role is to be present in the community, Father Condon said, not only within the parishes of his diocese, but in the larger community. There he should engage and be in dialogue with people of all faiths and no faith, acting as the model of Christian love at all times.

The bishop also has many administrative responsibilities, which he is free to delegate so that he may tend to his duties as shepherd, according to Canon 391.

He is responsible for overseeing all diocesan offices and parishes, and serves as the steward of diocesan finances. The bishop also meets regularly with the other bishops in the New York Province and with his fellow bishops in the U.S. Conference of Catholic Bishops to define and promulgate policies and teachings, Father Condon said.

Canon 378 notes that a candidate for bishop must be at least 35 years old, a priest for at least five years, and hold a “doctorate or at least a licentiate in sacred scripture, theology, or canon law from an institute of higher studies approved by the Apostolic See” or be a true expert in the same disciplines.

Canon 396 says the bishop must regularly visit each part of his diocese, and Canon 395 says he must attend bishops’ meetings (called synods) when they are called

The marks of the universal church — “one, holy, catholic and apostolic” — also are present in what canon law refers to as the “particular church,” or diocese, Father Condon said. While the pope, as the Bishop of Rome, administers the universal church with the assistance of the Roman Curia, the diocesan bishop appoints a diocesan curia, which consists of the senior staff (director of human resources, chief financial officer, directors of faith formation and Parish and Clergy services, etc.) of the Pastoral Center or Chancery to assist him in the administration of the diocese.

The bishop also appoints a chancellor who is the archivist of official diocesan records, a notary and secretary of the diocesan curia, according to Father Condon.

Although the bishop has the responsibility for the governance of his diocese, church law sometimes requires him to consult appointed bodies within his diocese as part of the decision-making process. According to Father Hart, there are three such bodies in the Diocese of Rochester.

* The Priests’ (or Presbyteral) Council. This body comprises as many as 18 priests, most of them elected by their fellow priests, and meets regularly to discuss matters affecting the diocesan mission. The council must be consulted in certain prescribed circumstances, such as the convening of a diocesan synod or the establishment or closing of parishes. The bishop is not bound by the council’s recommendations.

* The College of Consultors. This body, which consists of priests chosen by the bishop, some of them from the diocesan Priests’ Council, must be consulted on specific matters, Father Hart said. For example, when a major church renovation is planned in the Diocese of Rochester, two consultors will review the project and present their recommendations to the college, which will debate the plans and make a recommendation to the bishop. This body also must be consulted before major financial transactions are approved. The bishop is not bound by the consultors’ recommendations.

* The Diocesan Finance Council. This body currently consists of roughly 20 members, including the presidents of both the Sisters of Mercy and Sisters of St. Joseph, the president of St. Bernard’s School of Theology and Ministry, and several laypeople with financial and legal expertise. The finance council must consent to the sale of property valued in excess of $750,000 in certain prescribed circumstances. The bishop must obtain finance council approval of the annual diocesan budget and diocesan investment strategies.

In the performance of his executive duties, the bishop also would typically seek the counsel of the diocesan curia, even though it is not a consultative body, Father Condon said.

As prescribed by the New York State Religious Corporation Law, the bishop is the ex-officio president of each parish and also of several affiliated member corporations, such as the Rochester Catholic Press Association Inc., publisher of the Catholic Courier and El Mensajero Cat√≥lico; Camp Stella Maris; Providence Housing Development Corp.; and Catholic Charities. These organizations are owned by their “members” — including the bishop, vicar general and chancellor — who must approve major decisions.