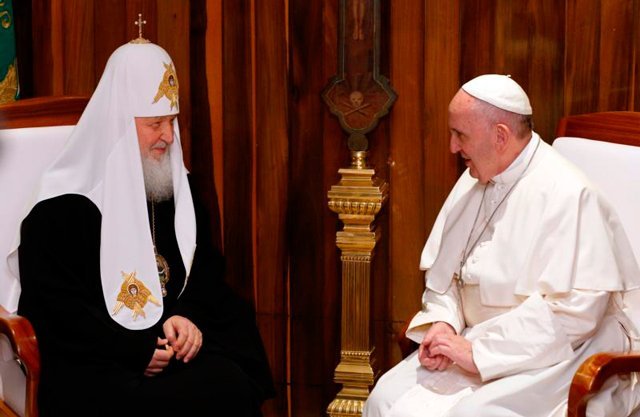 Russian Orthodox Patriarch Kirill of Moscow and Pope Francis meet at Jose Marti International Airport in Havana Feb. 12. The pope was traveling to Mexico for a six-day pastoral visit.

Amid the clicking of cameras and multiple flashes, Patriarch Kirill was overheard telling the pope, "Things are easier now."

"It is clearer that this is God’s will," Pope Francis told him.

A flight of almost 12 hours capped months of intense negotiations and more than two decades of Vatican overtures to bring a pope and a Russian patriarch together for the first time.

Cuban President Raul Castro played host to the pope and patriarch, who was on a visit to Russian Orthodox communities on the island-nation. Pope Francis had a pastoral visit to Mexico planned for months; the stop in Havana was announced only a week before the meeting.

The addition of a stopover in Cuba was widely seen as a sign of Pope Francis’ willingness to go the extra mile to reach out a hand in friendship. At the same time, observers said, it gave those Russian Orthodox opposed to ecumenism a sense that their church is special and that it bowed to no one in agreeing to the meeting.

In a commentary distributed Feb. 11, Ukrainian Catholic Bishop Borys Gudziak of Paris said: "The pope is demonstrating humility; he is going to the territory of the other. In the eyes of nostalgic Russians, Cuba is almost home territory, a last outpost of a lost Soviet Empire."

The Moscow Patriarchate had said that while those problems still exist with the Catholic communities, they take a backseat to the urgency of defending together the rights and very existence of persecuted Christians in the Middle East.

The harsh persecution of Christians and other minorities in Syria, Iraq and other parts of the region has been a cause Pope Francis has pleaded before world leaders and for which he has rallied the prayers of Christians across the globe.

He speaks often of the "ecumenism of blood," the fact that Christians are killed for believing in Christ with the persecutors not knowing or caring what denomination or church they belong to. Christians are fully united in that suffering and, the pope has said, those who die for their faith are in full communion with each other and with centuries of martyrs now in the presence of God.

But the fate of persecuted Christians was not the pope’s primary motive for meeting Patriarch Kirill. Simply meeting him was the point.

Metropolitan Hilarion Volokolamsk, head of the Moscow Patriarchate’s external affairs department, told reporters a week earlier that Patriarch Kirill chose Havana in the "New World" because Europe, the "Old World," was the birthplace of Christian division.

Ukrainians, Catholic or not, have expressed concerns about Pope Francis’ meeting with Patriarch Kirill given the patriarch’s apparently close ties to Russian President Vladimir Putin at a time of ongoing fighting in Eastern Ukraine.

"The topics of discussion will not be explicitly political ones," Bishop Gudziak wrote. "The gist of the rendezvous will be the encounter of church leaders representing very different experiences, agendas, styles and spiritualities of ecclesial leadership. One can hardly expect revolutionary results. Yet, it is through encounter that spiritual change occurs. Let us pray for good spiritual fruit."