A canonization's focus on legacy and holiness - Catholic Courier 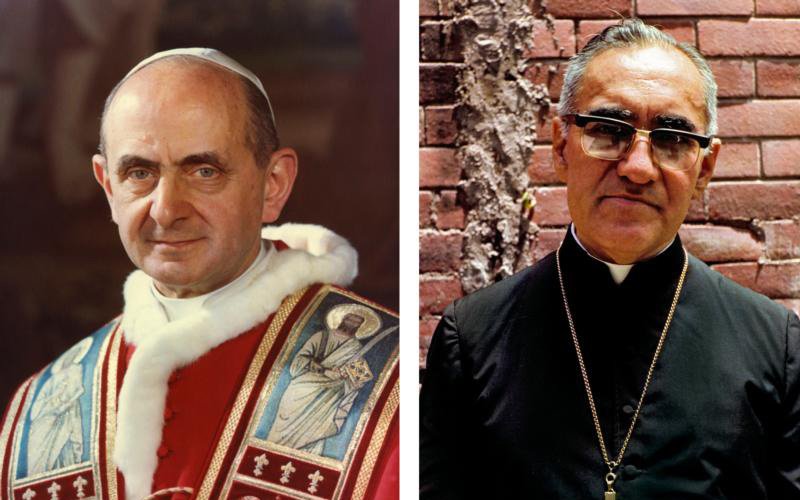 Pope Francis has cleared the way for the canonizations of Blesseds Paul VI and Oscar Romero. A canonization constitutes an emphatic, but plain and clear statement that holiness can be found in this world; holiness is within our reach. (CNS photos/files/Octavio Duran)

The gunman who fired the shot in El Salvador March 24, 1980, that killed San Salvador’s revered Archbishop Oscar Romero while he celebrated Mass in a hospital chapel surely did not aim to help create a martyr whose life and legacy one day would be honored throughout the world.

Instead, the gunman aimed to dull the social effects of Archbishop Romero’s complete commitment to his nation’s poor and to all those suffering the harms of continuing assaults on their human rights.

The gunman’s shot will reverberate again in a way he would not have welcomed when the archbishop, declared a martyr for the faith in February 2015, is canonized in Rome Oct. 14. That day, Archbishop Romero’s legacy of committed love and service will be on full display for the entire world to see.

His legacy matters in the church, for as Pope Francis writes in “Rejoice and Be Glad” (“Gaudete et Exsultate”), his spring 2018 apostolic exhortation on holiness, a saint’s “imitation of Christ” is considered worthy of “admiration” (No. 5). It inspires others.

Yet, at heart, a canonization’s goal is simpler than highlighting a saint’s perhaps complex and far-reaching legacy to this world. A canonization constitutes an emphatic, but plain and clear statement that holiness can be found in this world; holiness is within our reach.

“God asks everything of us, yet he also gives everything to us.” He enters human lives “to bring them to fulfillment,” Pope Francis’ apostolic exhortation states (No. 175). He writes, “We are all called to be holy by living our lives with love and by bearing witness in everything we do, wherever we find ourselves” (No. 14).

Canonized together with Archbishop Romero will be the very pope who in 1977 named him to lead the San Salvador Archdiocese, Blessed Paul VI. Their canonizations take place during a world Synod of Bishops assembly that will focus on the difficult challenges young people encounter in contemporary societies when discerning what to make of their lives and how to live by faith.

Oh, and did I mention that a saint’s legacy may be complex and far-reaching? It was Pope Paul who, as the Second Vatican Council neared its 1965 conclusion, restored and re-established the Synod of Bishops as a body representing the church around the world, a body asked to examine and deliberate key questions and developments in today’s church and world.

So the Synod of Bishops is part of this pope’s legacy, along with his noble efforts to bring the Second Vatican Council to a successful conclusion after the death of St. John XXIII. It was Pope Paul, too, whose 1968 encyclical “Humanae Vitae” stirred concern and respect for human life in the womb, for the meaning and value of married love, as well as for the worth of all human life.

Then there was “Evangelii Nuntiandi,” his 1975 apostolic exhortation on proclaiming the Gospel in our times. That message could be viewed as a seedbed for the major focus in today’s church on “the new evangelization.”

A glance at Blessed Paul’s legacy, moreover, cannot overlook his social justice writings, particularly the 1967 encyclical on the development of nations (“Populorum Progressio”). Development is “the new name for peace,” the encyclical famously proclaimed.

A pope’s legacy, almost by definition, is vast, multifaceted. So it is in the case of the church’s new “St. Paul” — St. Paul VI.

It is customary on the occasion of a canonization to recall a saint’s legacy. Equally important, however, is remembering the saint’s holiness and what that might mean now for the lives of Christians.

For, while a canonization is first about someone, about an Archbishop Romero or a Pope Paul VI, it is a declaration too about this basic purpose of life in Christ — about holiness.

Because canonizations are all about holiness, they have a basic religious educational dimension. A canonization asks who is holy and what holiness looks like.

To recognize the holiness found in our surrounding world it is necessary to take ordinary life seriously, Pope Francis indicates in “Rejoice and Be Glad.” After all, holiness may rather simply mean finding “a more perfect way of doing what we are already doing,” he writes (No. 17).

There is, moreover, nothing to fear about holiness, he affirms. “It will take away none of your energy, vitality or joy” (No. 32).

Thus, Pope Francis proposes that people who are married can find holiness “by loving and caring” for each other, “as Christ does for the church.” Those working for a living are counseled to “be holy by laboring with integrity and skill in the service” of others, and those in positions of authority are encouraged to work “for the common good” and to renounce “personal gain” (No. 14).

The Lord “wants us to be saints,” but he does not want us to settle for a “bland” existence, Pope Francis states. He believes this is what makes saints so surprising and confounding.

For, through their enthusiasm “about sharing true life,” saints inspire us “to abandon a dull and dreary mediocrity” (No. 138).