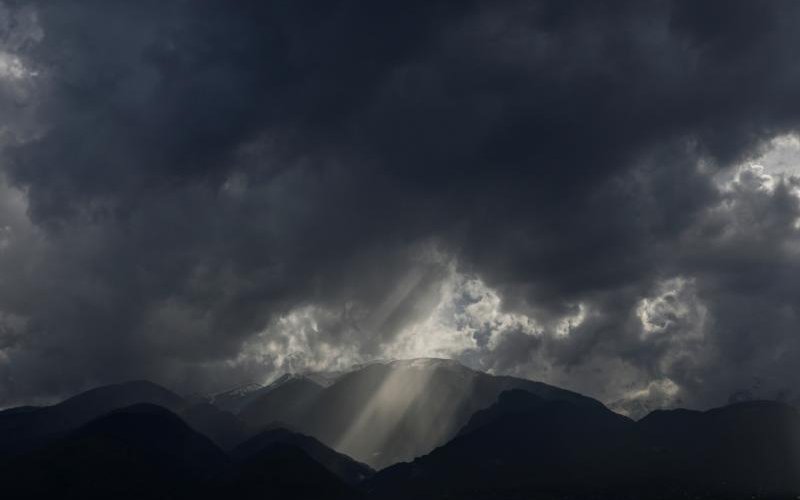 Sun rays appear through heavy clouds over Mount Olympus in Greece May 17, 2019. Divine providence names how God interacts with us and our universe. (CNS photo by Alkis Konstantinidis/Reuters)

Divine providence names how God interacts with us and our universe: “God cares for all, from the least things to the great events of the world and its history” (Catechism of the Catholic Church, No. 303).

Yet this belief in God’s care and plan for us leads us to ask important questions like, “If God is so present, why is there evil?” “Do I really have free choices if God has planned my life?”

Christian tradition suggests that if God really is who God has revealed himself to be, God’s presence is compatible with our free will and even with the fact that evil exists. First, though, it’s important to name three contemporary approaches that are distortions of Christian divine providence.

One approach denies God’s interactions (atheism). Christopher Hitchens, a well-known contemporary atheist, dismisses any concept of God’s plan: “I suppose that one reason I have always detested religion is its sly tendency to insinuate the idea that the universe is designed with ‘you’ in mind or, even worse, that there is a divine plan into which one fits whether one knows it or not.”

For Hitchens, there are at least two problems with a divine plan. One is the arrogant and individualistic focus on “me.” Another is that “a god” has a plan, because “gods” are human-made attempts to hold power over others.

Sociologists Christian Smith and Melinda Lundquist Denton have observed that many people today express beliefs such as:

“A god exists who created and ordered the world and watches over human life on earth”; that God basically wants people to be nice to each other; that life’s purpose is to be happy, which means feeling good about one’s self; that God is not involved with us unless God is invited to be, and that good people go to heaven.

Moralistic therapeutic deism suggests that we have maximum choices in our lives. We may even have some control over “god,” since all we need to do is call upon “god” in moments we perceive as troubling. God has no overall plan for us other than happiness.

A third approach describes God’s interactions in terms of fate.

Fate suggests we have a predetermined outcome, with few or no choices. Some of our favorite contemporary stories feature strong aspects of fate. A person might be fated to be king or to take up a difficult task that will save the world.

The ancient Greek tragedy “Oedipus Rex” describes Oedipus’ fate: He will kill his father and marry his mother, despite trying desperately not to do those things. Popular novels and films, including “Harry Potter,” “Lord of the Rings” and “Game of Thrones,” feature fate that enables people to save the world.

The stories we tell about fate shape our sense of the degree of choice that we have. These stories indicate that it is we humans who save the world, especially if we follow our fated path.

Christian thinking assents to none of these paths. In contrast, Christians insist that God is not a mere being among others. God cannot be fully described by any object within it — including human imagination.

All time and space, the smallest atom, the largest living being, everything known and unknown, is God’s. We don’t fully know what God is, but Christians do not dismiss God simply because we cannot see or understand all of what God might be.

Though God is mysterious, God reveals himself to us. Many people have testified to God’s real and direct presence in their lives. Some have written down these encounters, through the power of the Holy Spirit, in Scripture.

Scripture names God’s whole history with us: God creates, redeems and draws us toward Christ’s Second Coming, when God will be “all in all” (1 Cor 15:28). Scripture reveals that God cares deeply for us (Ps 139:13-14).

How can God do this for every single being? If God was a mere object in the universe, we would quickly dismiss God’s presence. Precisely because God is not a mere object, that means God is for me, you and for the smallest atom, too.

God exists entirely as God, while we exist entirely as ourselves, too. So our free will and God’s will co-exist. We are part of God’s real, everlasting love. Yet love is not coercive, but frees us to be ourselves and make decisions even as God constantly seeks us.

God’s presence in our history exists even despite human suffering and the presence of evil. (Read the Book of Job or stories of Christian martyrs.) Christians believe that God stands directly with us and for us, even in the midst of pain and suffering. The lack of happiness does not mean a lack of God.

So as we navigate a world that proposes three distorting approaches to God’s presence, we Christians are asked to think quite differently.

We are asked to name God’s real and direct presence in our own lives, even as we proclaim that God is mysterious. Our God loves us utterly and deeply, and without end.

(Bennett is professor of moral theology at the University of Dayton in Ohio. She is co-author, along with David Cloutier, of the book “Naming our Sins: How Recognizing the Seven Deadly Vices Can Renew the Sacrament of Reconciliation.”)