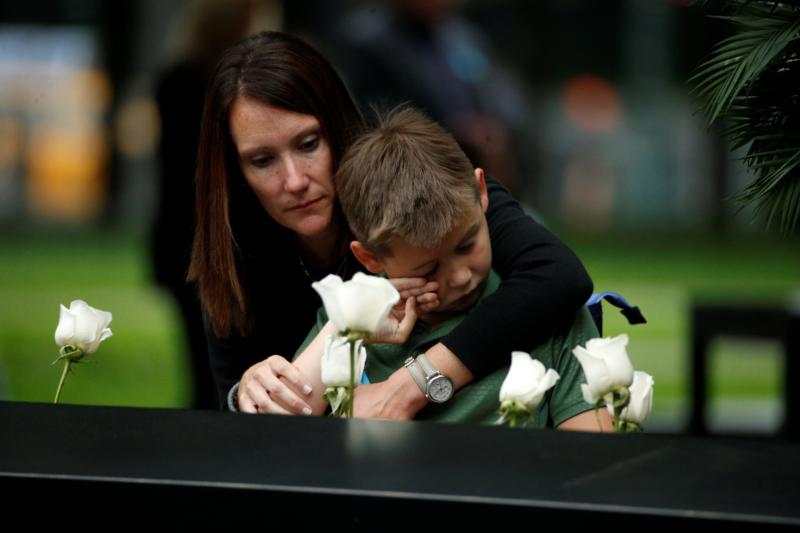 A woman and child place flowers at the National September 11 Memorial and Museum during Sept. 11 ceremonies to mark the 17th anniversary of the terrorist attacks in New York. Nearly 3,000 people died in the attacks in New York City and Shanksville, Pa., and at the Pentagon. (CNS photo by Brendan McDermid/Reuters)

I recall excitedly looking forward to a preschool interview for our oldest child, who is now 20. But first, I had gone to exercise at the Jewish Community Center in Brighton. When the first plane hit the Twin Towers, the center closed immediately. I raced home trying to comprehend the news unfolding on my car radio.

In those moments, we all know our world changed.

Among those affected most were our country’s immigrants, those with papers and without, who were subsequently viewed with suspicion or disdain and many years later banned from entry.

During a recent workshop at St. Bernard’s School of Theology and Ministry, participants learned of the effects of immigration policies that followed.

A high-school student talked of her father’s deportation and the anxiety, depression and stress she and her siblings have experienced since then.

Without her father’s income, Nancy may pass on college to work and help her family. Her father now farms just to survive in his hometown in Mexico.

But out of the darkness came a moment of light when a woman connected with Nancy and promised to create a cultural exchange through meals, tutoring and whatever the family needed. This woman was doing as Pope Francis advised before a joint session of Congress in 2015: “When the stranger in our midst appeals to us, we must not repeat the sins and the errors of the past. We must resolve now to live as nobly and as justly as possible, as we educate new generations not to turn their back on our ‘neighbors’ and everything around us.”

Nancy came away with hope, but how many countless children are wondering what their future holds in the “Land of the Free?”