A debate arises regarding the gentiles - Catholic Courier 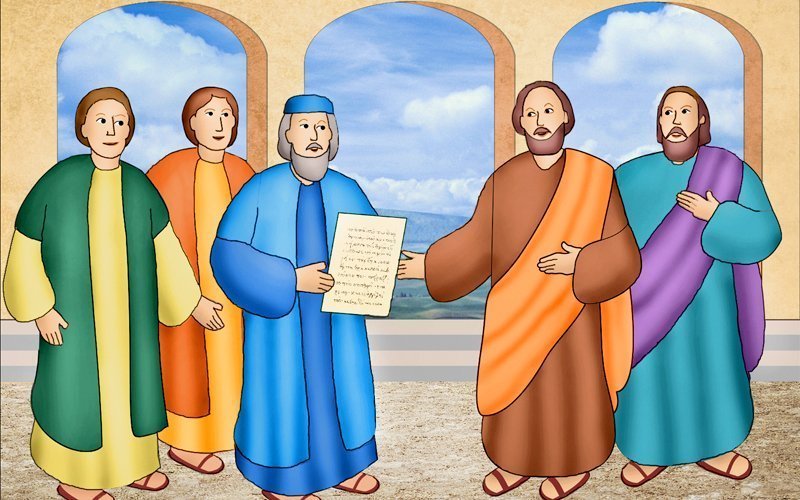 A debate arises regarding the gentiles

A debate arises regarding the gentiles

After having a vision from God, Peter told the followers of Jesus that it was OK to convert the gentiles to Christianity.

So, Paul, Barnabas and others traveled to gentile communities and began converting the people. However, some of Jesus’ followers told the gentiles that to become Christian and be saved, they first had to become Jews and follow the Mosaic law.

Paul and Barnabas disagreed. They and some others decided to visit Jerusalem to ask the apostles and elders their opinions.

After the apostles and the elders debated the question, Peter stood up and spoke.

“My brothers, you are well aware that from early days, God made his choice among you that through my mouth the gentiles would hear the word of the Gospel and believe,” Peter said.

“And God, who knows the heart, bore witness by granting them the Holy Spirit just as he did us. He made no distinction between us and them, for by faith he purified their hearts. Why, then, are you now putting God to the test by placing on the shoulders of the disciples a yoke that neither our ancestors nor we have been able to bear? On the contrary, we believe that we are saved through the grace of the Lord Jesus, in the same way as they.”

“It is my judgment, therefore, that we ought to stop troubling the gentiles who turn to God, but tell them by letter to avoid pollution from idols, unlawful marriage, the meat of strangled animals and blood,” he said.

The apostles and elders wrote a letter and had Paul, Barnabas, Barsabbas and Silas travel to Antioch to deliver it to the gentiles.

“It is the decision of the Holy Spirit and of us not to place on you any burden beyond these necessities, namely, to abstain from meat sacrificed to idols, from blood, from meats of strangled animals and from unlawful marriage. If you keep free of these, you will be doing what is right.”

When the gentiles read the letter, they were delighted.

2. How did the gentiles react to the letter they received?

In Acts 11, we read how Peter explained to his friends why he had converted and baptized a family of gentiles.

Peter had been staying at a home in Joppa when he received a vision from God telling him to slaughter and eat animals that the Jews considered unclean.

Peter refused. Then he heard a voice say, “What God has made clean, you are not to call profane.”

The Holy Spirit then told Peter to go with three gentile men who were coming to see him. They took Peter to the home of Cornelius, a gentile who had found favor with God.

Peter preached to Cornelius and his family. As he spoke, they were filled with the Holy Spirit, and Peter baptized them.

“If then God gave them the same gift he gave to us when we came to believe in the Lord Jesus Christ, who was I to be able to hinder God?” Peter said.

In Acts 6:1-7, we read that St. Philip was one of “seven reputable men, filled with the Spirit and wisdom” chosen to assist the apostles.

These men were chosen in response to complaints by the Hellenists that their widows “were being neglected in the daily distribution.” Since the apostles thought it was not right for them to neglect the word of God and their preaching, they asked these seven men to handle the situation with the Hellenists.

Philip also was an evangelizer, and in Acts 8:4-40, we read about some of the things that he did. For example, in Samaria, he baptized Simon, who was a magician. And as he was traveling on the road to Gaza, Philip baptized an Ethiopian official that he met along the way.

We remember Philip on June 6.

Unscramble the letters in each word and arrange the words to form a quotation from the children’s story.