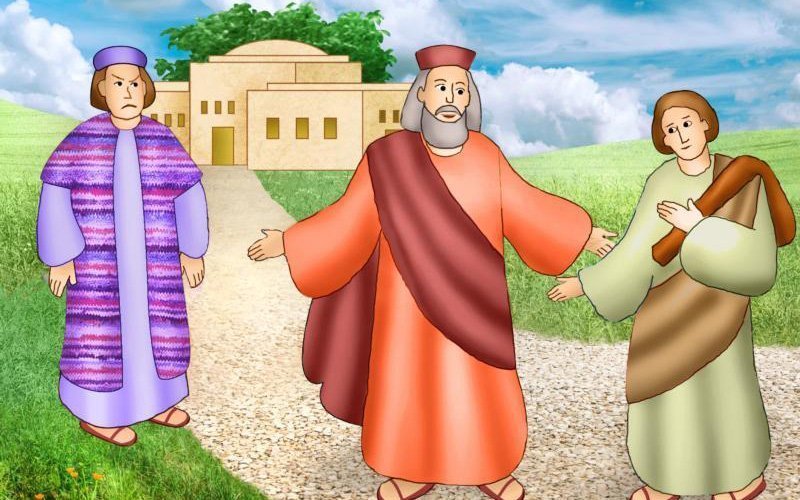 This is the artwork for Kids' Chronicle for March 14, 2020. (Illustration by Linda Rivers)

A father celebrates his son’s return

One day, tax collectors and sinners gathered around Jesus to hear him speak.   The Pharisees and scribes were disgusted.

“This man welcomes sinners and eats with them,” they sneered.

Jesus overheard them and decided to tell the parable of the lost son.

There was a man who had two sons, Jesus told the crowd.

The younger son wanted to leave home, so he asked to be given his share of his father’s estate. The father did so, and the younger son set off for a distant country.

The younger son squandered all of his money. Afterward, a famine struck the country, and he could not afford to support himself.

He found work tending swine for a local farmer. He was so hungry that he was tempted to eat the pigs’ food.

Suddenly, the younger son came to his senses.

“How many of my father’s hired workers have more than enough food to eat, but here am I, dying from hunger,” he said to himself.

The younger son decided to return home. He planned to admit his sinfulness to his father.

While he was still a long way off, his father caught sight of him coming home and ran to embrace and kiss him.

“Father, I have sinned against heaven and against you; I no longer deserve to be called your son; treat me as you would treat one of your hired workers,” the younger son said.

Instead, the father told his servants to bring a fine robe, sandals and a ring for his son.

“Take the fattened calf and slaughter it,” the father ordered. “Then let us celebrate with a feast, because this son of mine was dead, and has come to life again; he was lost, and has been found.”

The older son, who always had done everything his father had asked, was angry that his wayward brother was being celebrated.

“My son, you are here with me always; everything I have is yours,” the father said to his older son. “But now we must celebrate and rejoice, because your brother was dead and has come to life again; he was lost and has been found.”

1. What did the younger son want from his father?

2. Why was the father excited to see the younger son return home?

ESSAY: When have you asked someone to forgive you for poor choices or bad behavior?

In verses 8-10, he told of a woman who lost one of 10 coins. He said that she surely would light a lamp and sweep the house carefully until she found it.

“And when she does find it, she calls together her friends and neighbors and says to them, ‘Rejoice with me because I have found the coin that I lost,'” Jesus said. “In just the same way, I tell you, there will be rejoicing among the angels of God over one sinner who repents.”

And in verses 1-7, Jesus told the parable of the lost sheep.

“What man among you having a hundred sheep and losing one of them would not leave the 99 in the desert and go after the lost one until he finds it?” Jesus asked. “And when he does find it … he calls together his friends and neighbors and says to them, ‘Rejoice with me because I have found my lost sheep.'”

“I tell you, in just the same way there will be more joy in heaven over one sinner who repents than over 99 righteous people who have no need of repentance,” he said.

In the late 1500s in England, Catholic clergy and laypeople began to be persecuted by the government. During the persecution, Nicholas traveled with the Jesuit provincial and stayed in the homes of Catholics who refused to obey a law requiring them to attend the Anglican Church of England. In these homes, Nicholas saved the lives of many persecuted priests by creating hiding places for them.

Nicholas eventually gave himself up to protect other Jesuits. Although he was tortured, he never revealed the location of his brothers.