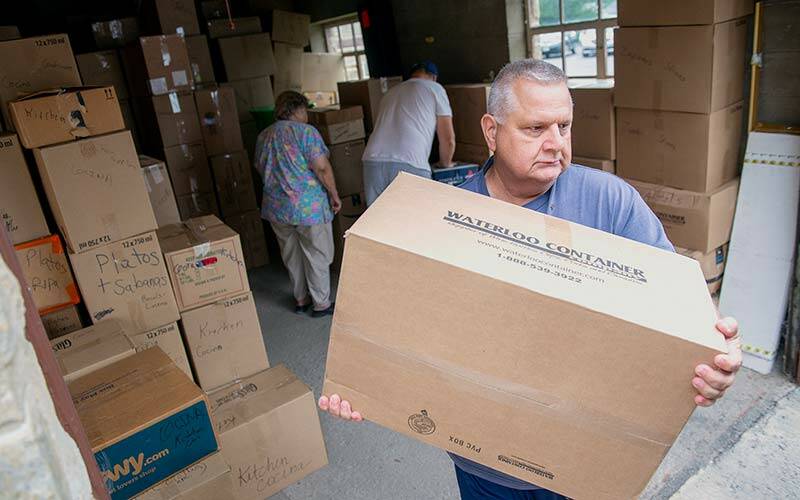 Bob Peterson carries a box of donated items to be packed into a truck at St. Patrick Church in Seneca Falls Aug. 24, 2021, as part of St. Francis and St. Clare Parish's Nicaragua Project. (Courier file photo)

For many years, a gabled green shed in Seneca Falls has been a visible sign of a Catholic parish’s commitment to the less fortunate in a Central American nation.

Over the years, people have dropped off thousands of donated items at this shed, and volunteers from St. Francis and St. Clare Parish packed these items in boxes, piled them into storage containers and shipped them off to people in need in Nicaragua. In recent years, however, political unrest in Nicaragua has prevented the volunteers from shipping items to those who need them, and the parish began turning away donations in 2019.

Now the shed has been put up for sale, but St. Francis and St. Clare’s Nicaragua Project is far from over.

“We’re not done,” confirmed MaryAnn Bender, one of the project’s coordinators.

Parish involvement in the Nicaragua Project goes back decades

The parish’s Nicaragua Project is part of a larger project known as the Nicaragua Mission Project, which is based in the Buffalo area and was founded decades ago by a lay missionary named Ann Marie Zon. She was inspired to found the mission after first visiting Nicaragua more than 40 years ago, and continues to oversee its work today. Supplying material items — such as clothing, toys and household goods — is just one of the ways the Nicaragua Mission Project helps families in Nicaragua. The project also provides cows and pigs for families and helps fund students’ education, among other things.

Parishioners from St. Francis and St. Clare, which has worship sites in both Seneca Falls and Waterloo, have supported several of these projects over the years, but the bulk of the parish’s involvement since the mid-1990s has been through its Nicaragua Project. Parishioners and others in the Waterloo and Seneca Falls communities supported this project by dropping off clothes, household items and toys at the green shed located on Routes 5 and 20 just west of Seneca Falls. Once a week, volunteers would sort and box the donated items, and in late summer they would load the boxes into a container on a tractor-trailer truck bound for Nicaragua.

Fueled by a sizable contingent of parish and community volunteers, the project ran like a well-oiled machine — until the spring of 2019. That’s when Zon contacted Bender to tell her the political climate in Nicaragua forced her to implement some changes to the mission’s time-tested methods.

In the spring of 2018, demonstrations against Nicaragua’s government turned violent, and international human rights observers were expelled from the country late that year, according to The New York Times. In a travel advisory issued in April 2019, the U. S. Department of State urged U.S. citizens to reconsider travel to Nicaragua due to civil unrest, limited health-care availability and arbitrary enforcement of laws. Around that time, the government — controlled by President Daniel Ortega and his wife, Vice President Rosario Murillo — stopped letting shipping containers filled with humanitarian aid enter the country, Zon told Bender in the spring of 2019.

Although Nicaragua Project volunteers continued to accept and pack donations, they did not fill and send another shipping container. Eventually, they gave some of the donated items they’d amassed to the Seneca County House of Concern and other local charitable organizations, and in August 2021, they sold the rest at a garage sale held on the grounds of St. Patrick Church in Seneca Falls. The proceeds were donated to Zon’s Nicaragua Mission Project, as Zon is still able to get financial donations into the country.

“It was a very ambitious, clever way of moving the items that they could not store and at the same time earn funds for the missions,” Zon wrote in a winter 2022 article in the Nicaragua Mission Project’s newsletter. “What a marvelous way to continue their generous attachment to Nicaragua.”

Parishioners had raised about $8,000 for the mission by the time Zon made her annual visit to Seneca Falls in August 2022, Bender said.

“People are just so upset that it’s so bad down there, but people can still help,” she said.

St. Francis and St. Clare’s social-ministry committee, in consultation with the parish’s pastor, Father James Fennessy, and representatives of the Nicaragua Project, decided to sell the shed on Routes 5 and 20, as it does not seem likely that humanitarian donations will be allowed into Nicaragua anytime soon, Bender said. However, parishioners are encouraged to continue supporting the other components of the Nicaragua Mission Project, she added. At Christmastime, for example, a donation of $100 will allow the organization to purchase a cow to gift to a Nicaraguan family. The cow will provide milk and cheese for the family, and the calves the cow will have in subsequent years will provide income for the family.

Tags: Faith in Action, Seneca County News
Copyright © 2022 Catholic Courier, Inc. All rights reserved. Linking is encouraged, but republishing or redistributing, including by framing or similar means, without the publisher's prior written permission is prohibited.