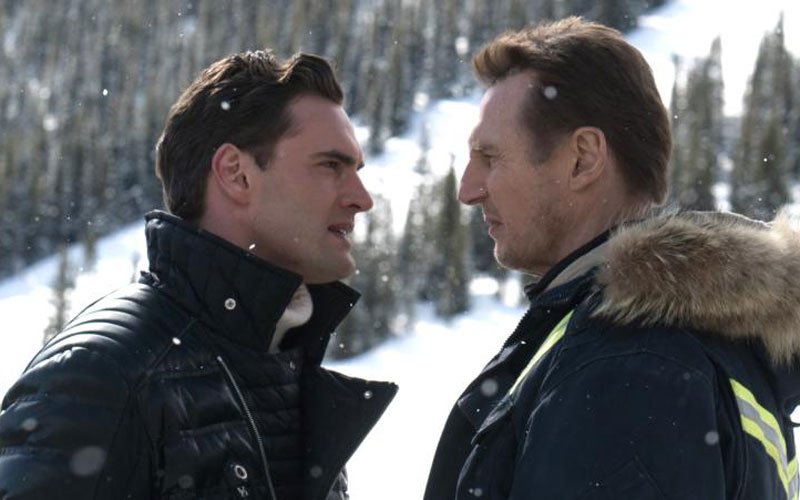 Tom Bateman and Liam Neeson star in a scene from the movie "Cold Pursuit." (CNS photo by Lionsgate)

NEW YORK (CNS) — A grieving father embarks on a murderous rampage to avenge the death of his son in “Cold Pursuit” (Summit), a bloodthirsty crime thriller.

Director Hans Petter Moland has taken the unusual step of remaking his own Norwegian-language film, 2014’s “In Order of Disappearance,” this time in English and relocated to the American Rockies. Despite some fine acting and stunning cinematography, this time-worn tale of vigilante-as-hero remains as unacceptable for viewers of faith as it was in the “Death Wish” movies of old.

Add to the mix extreme violence, gallows humor and skewed moral values, and this remake’s appeal is thoroughly on ice.

Nels Coxman (Liam Neeson) is a crusty snowplow driver in a remote Colorado ski resort. Day in and day out, he plows his lonely furrow, literally, keeping passable the only road to the outside world.

For his selfless work, Nels is named Citizen of the Year, much to the delight of his proud wife, Grace (Laura Dern), and their only child, Kyle (Micheal Richardson).

When Kyle is found dead of a heroin overdose, the Coxmans are shattered. Grace accepts the cause, but Nels is unconvinced, as their son did not abuse drugs.

As Nels broods and withdraws, Grace leaves him, and on the edge of despair he contemplates suicide. Before he can pull the trigger, Dante (Wesley MacInnes) stumbles in. A co-worker of Kyle’s at the local airport, he confesses their joint role in a bungled heroin heist.

The revelation of his son’s murder gives Nels a new purpose in life: revenge. As he wades into the seedy underbelly of the town, he methodically identifies those connected in some way with Kyle’s death, and disposes of each, using techniques, he says, gleaned from reading crime novels.

As he climbs the druggie food chain, Nels inches closer to the kingpin, Viking (Tom Bateman). No ordinary psychopath, Viking is an entrepreneur, a major benefactor of charities, and a doting dad to his precocious son, Ryan (Nicholas Holmes). When not dispatching hitmen, he offers unusual fatherly advice.

Some welcome comic relief in “Cold Pursuit” is provided by the local police officers (Emmy Rossum, John Doman), who take an awfully long time to notice that something is amiss in their town.

In the end, as sympathetic as Christian viewers may be of Nels’ loss, it is impossible to ignore the Gospel message and condone vigilantism and the film’s heroic portrayal of Nels’ actions.