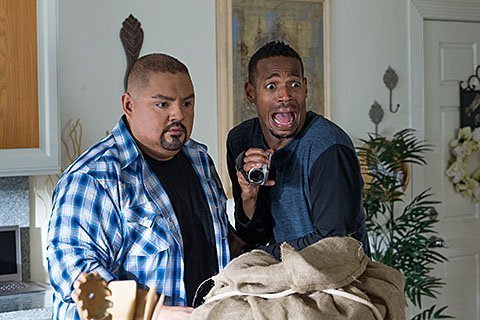 Gabriel Iglesias and Marlon Wayans star in a scene from the movie "A Haunted House 2." The Catholic News Service classification is O -- morally offensive. The Motion Picture Association of America rating is R -- restricted. Under 17 requires accompanying parent or adult guardian.

NEW YORK (CNS) — A year ago, we summed up the first "A Haunted House" as "pornographic when not being scatological." In "A Haunted House 2" (Open Road) obscene imagery, like an invading virus, has taken over even more territory.

Graphic depictions of body functions return along with the sex acts and racial stereotypes that characterized the original. It’s all supposed to be pulled together as a comedy by the frantic mugging of Marlon Wayans who stars in — and with Rick Alvarez co-wrote — this mess, directed by Michael Tiddes.

Wayans plays Malcolm Johnson. who in the previous flick had a demon-possessed girlfriend. This time, he’s married to Megan (Jaime Pressly) and trying to lead a new life. But evil spirits borrowed from the two "Insidious" films, as well as "The Conjuring" and "Sinister" keep turning up to thwart him.

Father Williams (Cedric the Entertainer), a blasphemous version of a Catholic priest, is also on hand, seemingly ad-libbing all his trash talk. Racist stereotypes of Mexicans are discussed often by Malcolm’s neighbor Miguel (Gabriel Iglesias).

We said the first installment "joylessly splashes around in a sewer with a wide range of perverse images." This time around, the cesspool has only gotten deeper.