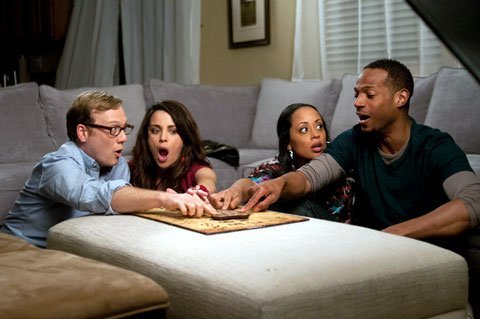 Intended by director Michael Tiddes and screenwriters Rick Alvarez and Marlon Wayans (who stars) as a scattershot parody of "found footage" horror films — mostly focused on the "Paranormal Activity" series, with a couple of others tossed in — the movie instead joylessly splashes around in a sewer’s worth of perverse images.

There’s also a foulmouthed, sexually promiscuous priest (Cedric the Entertainer) on hand to perform a grotesque form of exorcism.

Wayans plays Malcolm Johnson, who has girlfriend Kisha (Essence Atkins) move into his new house only to find that she has brought an evil spirit with her. Years ago, it seems, she’d made a deal with Satan in order to acquire a pair of designer shoes.

When the film isn’t trying to extract laughs with the stereotype of black people being terrified of haunted houses and a heavy use of racial slurs aimed both at black characters and at Rosa (Marlene Forte), a Mexican maid, it has the spirit interfering in every possible way with Malcolm and Kisha’s love life.

Before he brings in the vicious caricature of a clergyman, Malcolm employs a lascivious gay man, Chip the Psychic (Nick Swardson), and a coarse racist, Dan the Security Man (David Koechner). Tiresome toilet humor is thus interspersed with the supposed hilarity to be reaped from homosexual acts and bigotry.