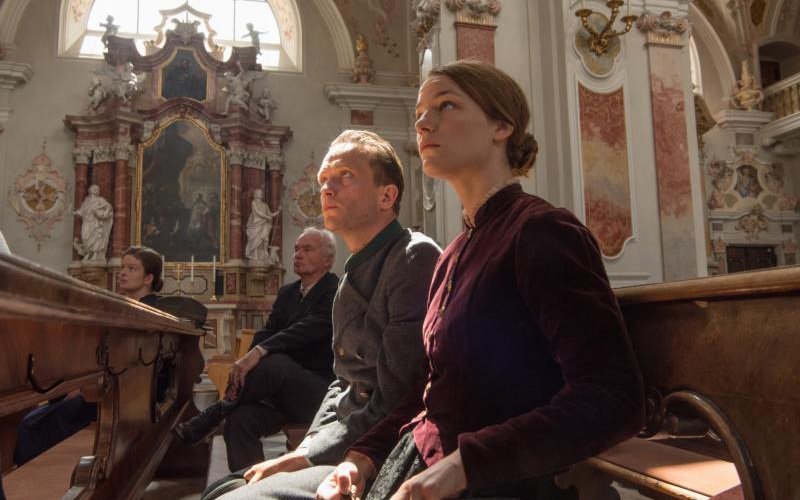 August Diehl and Valerie Pachner star in a scene from the movie "A Hidden Life." (CNS photo by Fox)

NEW YORK (CNS) — In 2007, Franz Jagerstatter (1907-1943), a devoutly Catholic Austrian farmer martyred by the Nazis for his stance as a conscientious objector, was declared blessed.

In the luminous, though deliberately paced, drama “A Hidden Life” (Fox Searchlight), writer-director Terrence Malick paints a striking and memorable portrait of Jagerstatter, one that will be especially prized by believing viewers.

Malick focuses on the happy home life of his gentle protagonist, played by August Diehl, sacrificed in order to be obedient to his conscience. Motivated by his faith, Jagerstatter was determined not to take the oath of loyalty to Adolf Hitler that was demanded of all those drafted into the Wehrmacht during World War II. Refusal of the oath would ultimately mean execution.

Along with his much-loved young daughters, Jagerstatter also would be leaving behind his wife, Franziska, known as Fani (Valerie Pachner), with whom he shared a deep spiritual and emotional bond and under whose influence he first became serious about his religion. So, as they wait for the possible news that Franz has been conscripted, she too has to struggle with the radical consequences of the commitment she inspired.

Primarily set amid the splendors of the Austrian countryside, surroundings of which cinematographer Joerg Widmer makes the most, “A Hidden Life” is beautiful both to look at and to contemplate. Yet the movie requires patience since it largely consists of scenes of ordinary domestic activities and farming chores, many of them overshadowed by the dread of what, at first, may lie ahead and later certainly does.

Still, by a process of accretion, Malick succeeds in building a sturdy bridge of sympathy between the audience and the central duo as they live out their doomed existence together — an idyll interspersed with drudgery. Thus by the time of Franz’s death, which Malick depicts with both deftness and sensitivity, attentive moviegoers will feel the weight of his loss to the full.

Malick — whose interest in Christianity, broadly considered, is well-known — celebrates Jagerstatter’s quiet heroism unreservedly. But his portrayal of the parish priest and bishop the future martyr consulted about his defiance of the regime is ambivalent at best.

Bishop Fliesser of Linz (Michael Nyqvist) is noncommittal and, although Father Furthauer (Tobias Moretti), the pastor of their hometown of St. Radegund, accompanies Fani on her last visit to Franz, he first counsels the latter that he has a duty to the Fatherland and is later so anxious to save his parishioner’s life that he advises him to take the oath without meaning it.

In a sign of the times, the real Franz apparently speculated, after their meeting, that Bishop Fliesser might have feared that he was a Gestapo spy out to trick the prelate into saying something dangerous.

It is satisfying to record that Fani lived long enough to attend her husband’s beatification, an experience perhaps unique in the long annals of the church. “A Hidden Life,” which draws on the 2009 book “Franz Jagerstatter: Letters and Writings From Prison,” edited by Erna Putz, ends with her yearning to be reunited with Franz, an eventuality that it is not presumptuous to trust transpired at her death, age 100, in 2013.

The film contains mature themes, scenes of physical violence and an ambiguous portrayal of Catholic clergy. The Catholic News Service classification is A-II — adults and adolescents. The Motion Picture Association rating is PG-13 — parents strongly cautioned. Some material may be inappropriate for children under 13.