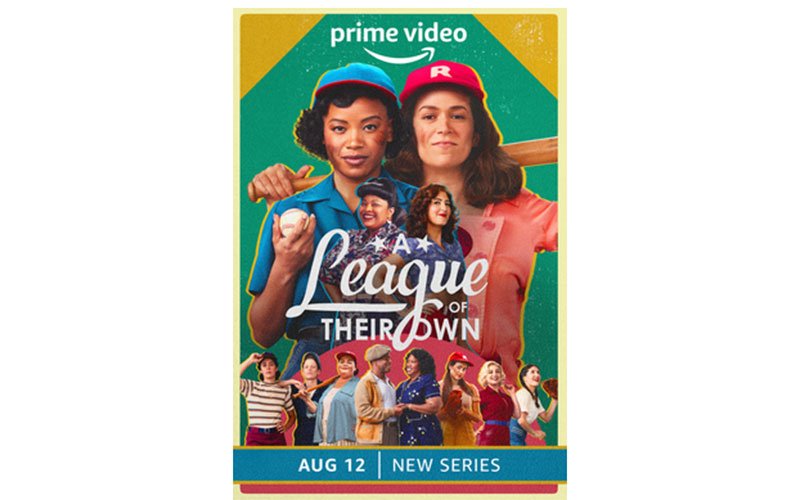 The promotional poster for “A League of Their Own.” (Amazon Prime and Sony Pictures Television)

NEW YORK – In 1992, director Penny Marshall had a hit with her fact-based, women’s baseball-themed dramady “A League of Their Own.” The film was successful enough, both critically and at the box office, that CBS launched a television adaptation the following year. It lasted only three episodes before being pulled from the air (two more installments were broadcast later).

Three decades on, the media environment has altered radically and so the folks at Amazon Prime, in collaboration with Sony Pictures Television, have decided to dust off the property and give us an eponymous eight-episode streaming version. The whole series is currently available.

At first blush, “A League of Their Own,” set during World War II, is a mostly cheerful affair, driven along by the Big Band music of the era and peopled by appealing characters who compensate for the weak writing that mars the script. Just as the excess of profane and vulgar language noticeable in the first episode gets tamped down, however, other problematic elements come to the fore.

The plot focuses on two young women, both of whom aspire to play for Rockford, Illinois’ newly formed team, the Peaches.

Catcher Carson Shaw (Abbi Jacobson, who also co-created the “A League of Their Own” series with Will Graham) sees a career in baseball as a way of escaping the small-town milieu in which she was raised. But she’s also impulsively trying to evade the imminent return of her GI husband Charlie (Patrick J. Adams), with whom she has a troubled relationship.

For her part, pitcher Maxine “Max” Chapman (Chanté Adams) is determined to demonstrate her skills on the mound. To do so, though, she’ll have to overcome the deep-dyed racism with which both she and her best friend, Clance Morgan (Gbemisola Ikumelo), are confronted at every turn.

Awed into awkwardness by her new surroundings, Carson finds a mentor in pretty, confident Greta Gill (D’Arcy Carden). Greta starts by giving Carson a make-over but then goes on to awaken what she believes to be Carson’s latent lesbianism with a brief but passionate necking session. Max, we later discover, also likes the ladies.

Curiously, this theme, as developed over the three installments screened, seems to reinforce – rather than break – a stereotype.

Be that as it may, such material obviously restricts the appropriate audience for the program. All the more so, since the narrative eventually presents the opportunity to engage in adulterous homosexual acts as a means of going for the gusto and living life to the fullest.

Taken together with a dream sequence involving a further layer of aberrance, all this jars on faithful sensibilities. Viewers formed by Gospel values will, accordingly, probably want to seek their entertainment elsewhere.