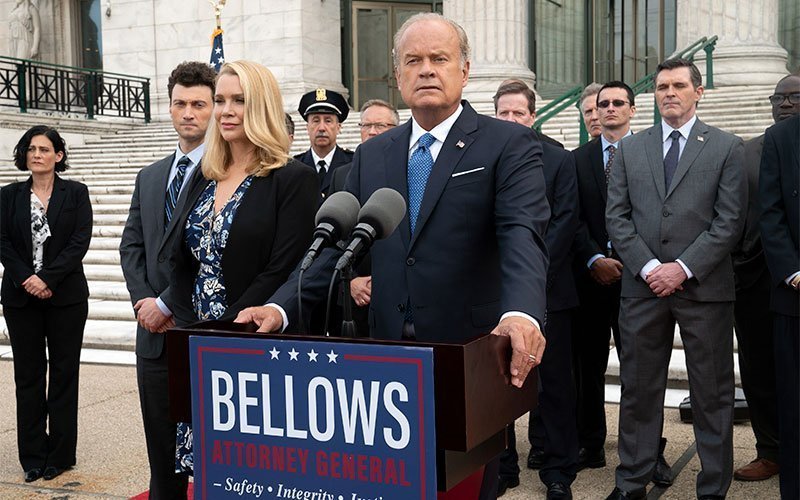 Guest star Laurie Holden and Kelsey Grammer in the "The Burden of Truth" episode of Proven Innocent. (Photo by Jean Whiteside, Fox)

NEW YORK (CNS) — The masterful and celebrated Netflix docuseries “Making A Murderer” paved the way for other documentaries about potentially innocent convicts, including ABC’s “The Last Defense” and “The Innocent Man,” Netflix’s adaptation of John Grisham’s 2006 book.

With the scripted drama “Proven Innocent” the Fox network puts its own spin on these tales of justice miscarried.

Debuting Friday, Feb. 15, 9-10 p.m. EST, the midseason replacement show gets off to a solid if not quite striking start. “Proven Innocent” will air in the same time slot throughout its 13-week run.

Danny Strong, the Emmy Award-winning executive producer behind Fox’s popular and critically acclaimed drama “Empire,” serves in the same capacity for this series.

Bellows had prosecuted Madeline and her brother Levi (Riley Smith) for the murder of their friend Rosemary Lynch (Casey Tutton), when the trio were teenagers living in the nearby suburb of La Grange. She and Levi spent 10 years in prison as a result.

Eventually, African-American attorney Ezekiel “Easy” Boudreau (Russell Hornsby), who has since become Scott’s law partner, managed to clear the siblings. Madeline graduated at the top of her Yale Law School class before joining forces with Boudreau.

Madeline and Boudreau set out to overturn another of Bellows’ convictions, that of Lucia Rincon (Liza Colon-Zayas). Rincon was accused of killing her child in a deliberately set house fire.

In the other episode available for preview, the legal team tries to reverse the 25-year prison term of Indiana Muslim woman Sarah Bukhari (Nishi Munshi). She was also charged with killing her child — either by homicide or feticide. But Sarah insisted that her baby was stillborn, and that she had, out of shame and in a panic, left the corpse at a construction site.

Madeline’s own trial provides the subtext for each case she takes on, as does her desire to settle scores with Bellows. He, however, is aiming to pass Rosemary’s Law, named for Lynch, as a way of supporting crime victims. Should he succeed it will, in the words of his mistress, Susan Alders (Elaine Hendrix), “gut her firm and silence your greatest critic.”

Despite Bellows’ opposition, Madeline determines to secure justice for Lynch, and find her true killer, even if that means becoming a pariah to people she grew up with like Heather Husband (Caitlin Mehner) and her spouse, Brian (Ben Marten). They’re convinced the Scotts did it. “Proven Innocent” is fundamentally concerned with Scott’s quest to find the actual killer in the Lynch case.

Besides the adultery and criminality themes described above, the show also features a fairly graphic suicide, some sexuality and substance abuse. Viewers also will need to evaluate Madeline’s bisexuality and a lesbian relationship in the context of church teaching. These problematic elements limit the suitable audience for “Proven Innocent” to discerning grown-ups.

Those committed to Gospel values will also be troubled by the portrayal of pro-life protestors as rabid extremists who pour blood on Bukhari as she enters the courtroom. That scene is offset, however, by the depiction of Boudreau.

As played with wonderful nuance by Hornsby, Boudreau is shown to be a man of deep faith and strong pro-life convictions. But he is also fair-minded. Thus, though he’s disturbed by the image of the abandoned fetus, he nonetheless believes that Bukhari is a victim of irrational religious bigotry and “deserves our mercy.”

Boudreau’s views conflict with Madeline’s outlook, and it will be interesting to watch how that dynamic plays out as “Proven Innocent” evolves.

Despite what’s commendable about the show, it suffers from being too unrealistic and from some ham-fisted characterizations. As fans of “Making A Murderer” well know, exonerating the falsely accused can take years, despite overwhelming exculpatory evidence. Yet, in the premiere, Scott manages to free two clients in less than an hour.

As representatives of the community scorn directed at Madeline, moreover, the Husbands are too broadly and simplistically drawn. Sullen and vindictive, it’s too easy to dismiss them as irredeemable villains. Intelligent viewers would expect more subtle shades of gray.

It’s premature to predict the future of “Proven Innocent,” based on two episodes. But if producers interject a stronger dose of reality and focus still more on Scott’s quest to find Lynch’s actual murderer, the show may yet command sustained interest and attention.