A leper is cured by the prophet Elisha - Catholic Courier 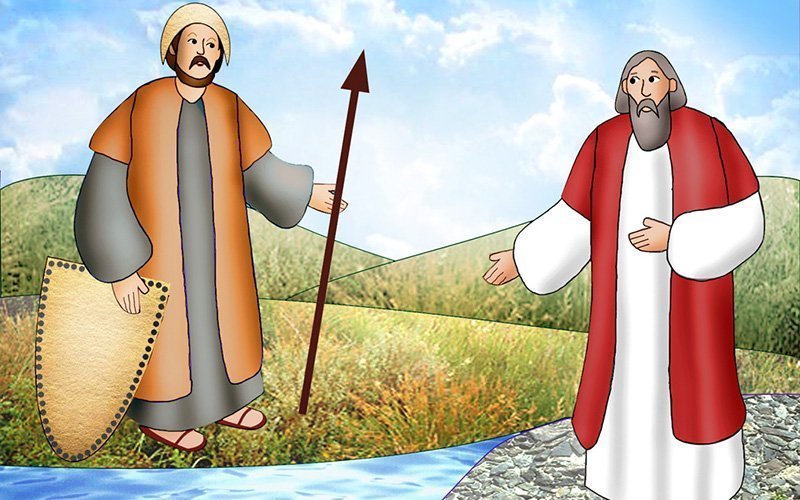 A leper is cured by the prophet Elisha

A leper is cured by the prophet Elisha

Naaman was the commander of the army of the king of Aram. He was very brave, and he was respected by both his soldiers and the king himself. But he had a serious medical problem. He had leprosy.

A servant of Naaman’s wife was an Israelite girl. She said to her mistress, “If only my master would present himself to the prophet in Samaria, he would cure him of his leprosy.” When the king heard of this, he told Naaman to find this prophet. Naaman immediately left with his horses and his chariots.

The prophet, whose name was Elisha, said to Naaman, “Go and wash seven times in the Jordan, and your flesh will heal, and you will be clean.”

This did not please Naaman. He said to his servants, “I thought that he would surely come out and stand there to invoke the Lord his God, and would move his hand over the spot, and thus cure the leprosy. Are not the rivers of Damascus, the Abana and the Pharpar, better than all the waters of Israel? Could I not wash in them and be cleansed?”

Naaman’s servants tried to change his mind. “My father,” they said, “if the prophet had told you to do something extraordinary, would you not have done it? All the more now, since he said to you, ‘Wash and be clean,’ should you do as he said.” Naaman listened to his servants. He washed in the Jordan river and was healed.

He returned to the home of Elisha, and he said to the prophet, “Now I know there is no God in all the earth, except in Israel. Please accept a gift from your servant.”

Elisha answered, “As the Lord lives whom I serve, I will not take it.” Naaman offered again, but still Elisha refused.

“I will no longer offer holocaust or sacrifice to any other god except to the Lord,” said Naaman. “But I trust the Lord will forgive your servant this: when my master enters the temple of Rimmon to worship there, then I, too, as his adjutant, must bow down in the temple of Rimmon.”

After Naaman had started for home, Gehazi, one of Elisha’s servants, had an idea. “My master was too easy with this Aramean Naaman, not accepting what he brought. … I will run after him and get something out of him.” He lied to Naaman and tricked him into giving him silver coins and fine clothing, then he returned home with his prizes.

Elisha knew what happened, and he was angry. “Was I not present in spirit when the man alighted from his chariot to wait for you? Is this a time to take money or to take garments, olive orchards or vineyards, sheep or cattle, male or female servants? The leprosy of Naaman shall cling to you and your descendants forever.”

Q&A
1. What did Elisha tell Naaman to do?
2. Why was Elisha angry with Gehazi?

Than name Elisha means “God is salvation.” Elisha became one of the most important prophets after Elijah ascended into heaven. Most of what we know of his life is written in the book of 2 Kings. He did not keep any records of his own, so the biblical account is based on the oral stories that were passed on from generation to generation. Elisha cared about people, and he helped them whenever he could, but he also was concerned about his country’s leaders, so he spoke with kings and officials as well. Most of all, he wanted his people and his leaders to recognize God as the true leader of Israel. Elisha set a good example for us to follow today.

Edward the Confessor (1002-1066) was sent to Normandy when he was only 10 years old to escape Earl Godwin, a tyrannical ruler. His brother returned home to England in 1036 and was killed, and Edward did not return until he was 40 years old, when he was called to be king of England. Edward was loved by his people because of his religious devotion and his fairness. He was kind to the poor and to visitors to England. He wanted to make a pilgrimage to St. Peter’s tomb in Rome, but his advisers warned he should not be gone from the throne for such a long period of time. Instead he built a monastery in honor of St. Peter. The church became known as West Minster, and it was consecrated in 1065, one week before Edward died. We remember him on Oct. 13.