A man with leprosy asks Elisha to heal him - Catholic Courier 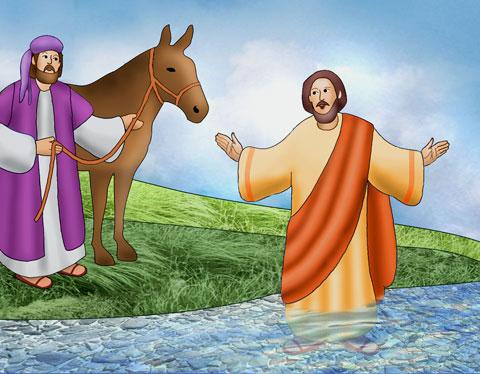 A man with leprosy asks Elisha to heal him

A man with leprosy asks Elisha to heal him

Naaman was the commander of the army of the king of Aram. But he also had leprosy. His wife’s servant, a young Israelite girl, said to her mistress, “If only my master would present himself to the prophet in Samaria, he would cure him of his leprosy.”

When Naaman was told about this special prophet, he went before the king, who said, “Go. I will send along a letter to the king of Israel.” Naaman assembled a caravan to accompany him. He presented the letter of introduction to the king of Israel. It read, “With this letter I am sending my servant Naaman to you, that you may cure him of his leprosy.”

The king asked, “Am I a god with power over life and death, that this man should send someone to me to be cured of leprosy? Take note! You can see he is only looking for a quarrel with me!” When Elisha heard what had happened, he sent a message to the king. “Why have you torn your garments? Let him come to me and find out that there is a prophet in Israel.” Naaman led his horses and chariots to the home of Elisha. Elisha said to him, “Go and wash seven times in the Jordan, and your flesh will heal, and you will be clean.”

Naaman became angry. “I thought that he would surely come out and stand there to invoke the Lord his God, and would move his hand over the spot, and thus cure the leprosy. Are not the rivers of Damascus, the Abana and the Pharpar, better than all the waters of Israel? Could I not wash in them and be cleansed?” And Naaman gave the order for his caravan to return home.

But Naaman’s soldiers and servants pleaded with him to do what Elisha had said. So Naaman agreed. When he emerged from the river the seventh time, he was healed. He returned to the home of Elisha and declared, “Now I know that there is no God in all the earth, except in Israel. … But I trust the Lord will forgive your servant for this: when my master enters the temple of Rimmon to worship there, then I, too, as his adjutant, must bow down in the temple of Rimmon. May the Lord forgive your servant this.”

Q&A
1. Why did Naaman need to be healed?
2. What did Naaman asked the Lord to forgive him about?

Elisha served under Elijah the prophet. The exciting story of how Elisha became the next prophet of Israel after Elijah was taken up into heaven can be found in the second chapter of 2 Kings. Elisha was given the mantle of Elijah to wear. This mantle was a garment that represented God’s spirit working in the prophet. The people of Israel recognized this and declared that the spirit of Elijah was now on Elisha. The spirit of God worked many wonders through Elisha, from the healing of Naaman to defeating the Aramean army without anyone being injured. Because of the similarity of the sounds of their names, it is easy to confuse Elijah and Elisha, but they both served God with all their might, and their acts of faith can be found in the two Books of Kings.

Mary Soledad (1826-1887) showed a religious devotion from the time she was a young girl. She loved to visit the nearby Dominican convent, and many of her friends and family thought she would join the order herself when she was old enough. But that did not happen. When Mary heard that the vicar of the Chamberi quarter of Madrid, Spain, was looking for seven women to become part of a new religious community that would help the sick, she knew that was what God wanted her to do. Within five years Mary had become the superioress of the community. The order soon became known as the Handmaids of Mary, and the work of these nuns spread into several other foundations to continue their ministry. Mary worked tirelessly building hospitals and helping the sick until her death. We honor her on Oct. 11.