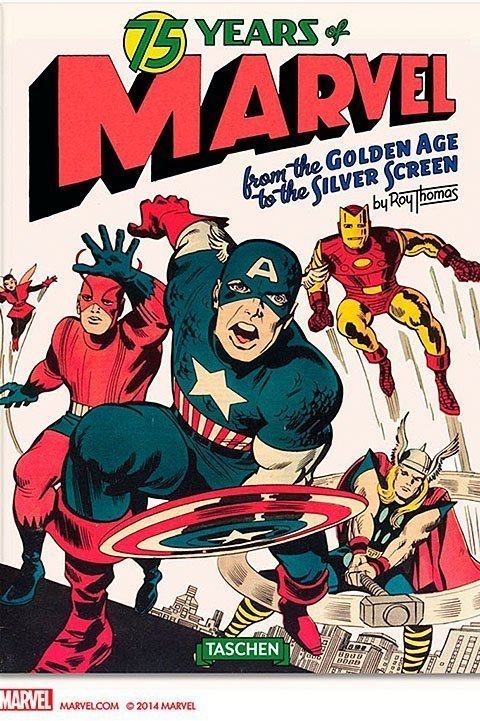 This is the cover of the comic book "75 Years of Marvel Comics: From Golden Age to Silver Screen." The Catholic News Service classification is A-II -- adults and adolescents. Not otherwise rated.

It’s not the content of this tome that can injure, but its size. "75 Years" is a gargantuan object. Not so much a doorstopper as a virtual door, it comes with its own suitcase. It’s no joke to say that a child under age 6 would have trouble lifting it. And there’s no Kindle edition.

As for what’s waiting within, "75 Years" is a gloriously illustrated and smartly written history of the comic-book company that has seemingly taken over the world. The home of Spider-Man, the Avengers, the X-Men, the Hulk and others, Marvel is now a billion-dollar corporation that produces blockbuster movies as well as popular texts.

"75 Years" is filled with action, of course, though it also includes a few images that are unsuitable for children. In the section of the book detailing how comics became edgier in the 1970s and ’80s, there’s some sexually suggestive material, a blurry depiction of partial female nudity and a panel showing a hero being violently impaled.

However, these images are not overly detailed or gory, and they represent only a few small reproductions within a book that is titanically rich in colorful eye-catchers. It’s possible to spend several enjoyable minutes just soaking in a single page of this volume.

While the book is primarily about art, veteran Marvel writer Roy Thomas also covers the commercial story of the firm. Marvel was founded in 1939 by Martin Goodman, a New York pulp magazine publisher. Goodman took advantage of the new popularity of comics, and hired artist Jack Kirby, who would go on to co-create some of Marvel’s marquee characters.

Stan Lee would become Kirby’s main collaborator. By 1941, Lee had worked his way up from office assistant to editor. Lee is now the living embodiment of the publisher, appearing in cameos in all Marvel’s films.

After the popularity of comic books began to die out in the late 1950s, Lee and Kirby revolutionized the form by creating a new kind of superhero — the crusader with personal hang-ups. Thus Spider-Man was Peter Parker, a perpetually broke teenager with girl problems.

The Fantastic Four were a superpowered family given to squabbling. The Hulk was a man whose transformative rage made him an outcast.

The personal struggles of these characters made their decency and moral striving all the more impressive, and placed them in contrast to the lantern-jawed heroes of the golden age of comics that flourished just before and just after World War II. Marvel characters were now like the rest of us.

Lee was genuinely funny and a tireless showman, creating a brand that crackled with wit and joy, as well as some psychological and political insight. Marvel Comics were soon popular not just at the soda shop but on college campuses as well.

After the Lee-Kirby era ended in the 1970s, new writers and artists took Marvel in a more serious direction. Spider-Man’s girlfriend, Gwen Stacy, was killed off, something previously unheard of in comic books.

Artwork depicting Warlock and Dr. Strange took on a style that might be called "druggy." Frank Miller, the writer and artist who would go on to create "Sin City," transformed Daredevil from a swashbuckling urban acrobat into a dark and brooding character. Iron Man developed a drinking problem.

There’s nothing wrong with this kind of realism, of course. But in recent years comic-book figures have perhaps gotten overly grim.

There are plenty of surly heroes in gritty settings to choose from these days. To rediscover the elegant and witty characters found in "75 Years," however, is to realize that some of the sheer glee that once flowed from being endowed with this or that superpower seems to have been lost along the way.

The book contains some bloodless violence and mildly sexualized images. The Catholic News Service classification is A-II — adults and adolescents. Not otherwise rated.