A pilgrimage to remember - Catholic Courier 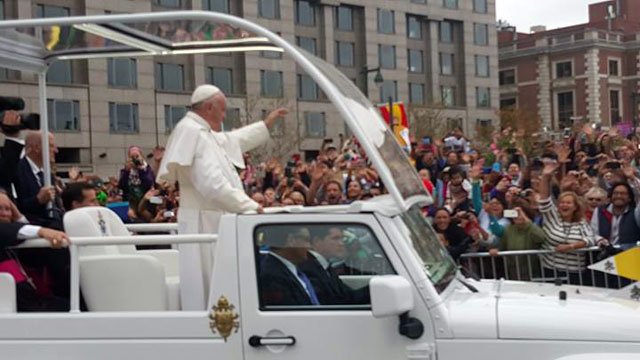 Pope Francis waves to the crowd gathered along the Benjamin Franklin Parkway in Philadelphia Sept. 27. (Photo courtesy of Sarah Shott)

When my brother, Mark, asked me almost a year ago if I wanted to go on a bus trip with his church from Williamsport, Pa., to see Pope Francis in Philadelphia, I jumped at the chance. Even though I had no details, I knew it was going to be an amazing experience.

But as the months went on and the details about Pope Francis’ trip started coming out, I started asking myself, ‘What did I get myself into?’ Walking more than five miles from the bus to the park where the Mass would be and being among 1.5 million people did not sound like fun. Plus, the fact that tickets for the Mass were sold out in 30 seconds meant my chances of seeing our Holy Father were pretty slim.

But at 5 a.m. on Sept. 27, I woke up ready for whatever God had planned for the day and was prepared to be a part of this once-in-a-lifetime experience.

Once getting into Philadelphia, my excitement and anticipation grew for the final Mass of Pope Francis’ trip to the U.S. There were signs everywhere welcoming him, and at every street corner, someone was selling something with Pope Francis’ face on it. 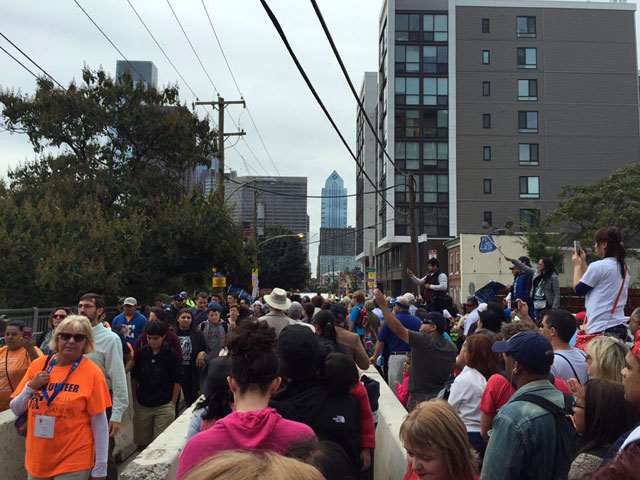 The line to get through security to attend Closing Mass of the World Meeting of Families in Philadelphia Sept. 27.

The biggest adventure of our day and the one that tested our patience the most was at the security line. The line was about five blocks long ahead of us and it grew even further behind us. I’m not one for lines and I don’t have a lot of patience, but this was different. We met people from all over, from as close as Scranton, Pa., to as far away as Texas and Florida. A group from a Polish church in Toronto, Canada, was beside us in line. They were singing in Polish the entire time. The whole time in line ended up being a lot of fun and made me realize just how far people came to be a part of this.

Once getting through security, we met up with 13WHAM anchor Jennifer Johnson, her photographer, John McClintock, and her producer, Mark Parrotte, who had been in town since Friday covering the pope’s visit. Jennifer and I worked together at News10NBC and the two of us made arrangements to meet up. The 13WHAM team had already grabbed a spot along the circle of the parkway, right near the Cathedral Basilica of Saints Peter and Paul where Pope Francis celebrated Mass the day before. While there weren’t too many Jumbotrons in that area to see Mass, a lot of people also had gathered around the circle in hopes that Pope Francis would come by on his way to celebrate Mass. 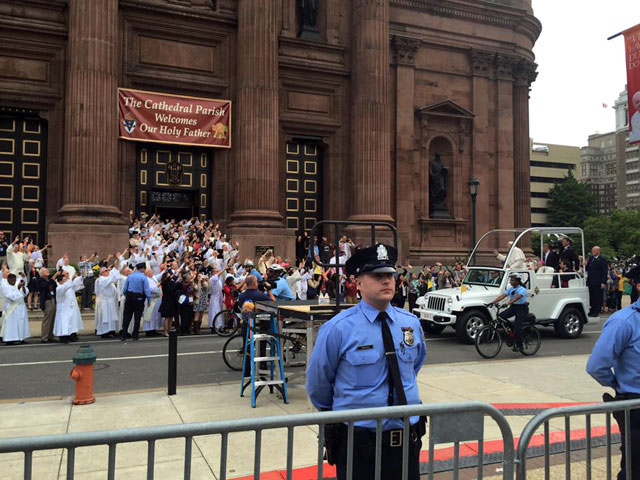 Pope Francis waves to the deacons, priests and the public gathered outside the Cathedral Basilica of Saints Peter and Paul in Philadelphia Sept. 27.

There was a lot of activity at the cathedral as well because the deacons and priests assisting with Communion for the Mass had gathered there. One of those deacons was Deacon Mike Zuber, chaplain at Monroe County Jail. As Jennifer started interviewing him outside the cathedral, she was instructed by police that she needed to vacate the area immediately. While they didn’t tell her too much, she had an idea what was going to happen. She had passed word along to us and we quietly made our way to an empty fence facing the cathedral. Police presence grew in the area. We even noticed a man, who we believed was a part of the security detail, standing discreetly behind us. Then within minutes, Pope Francis had made his way in the popemobile, just a few feet in front of where we stood. He was not on a Jumbotron, not on my television at home, but he was right in front of me. I tried to capture as many photos as I could, but I also put down my phone to allow my eyes to take it all in. I was at a loss for words. It was so surreal. We then moved toward the rest of the crowd along the circle and saw Pope Francis again.

When it was time for Mass, the area around us got quiet. So quiet you could hear a pin drop. Though we couldn’t even see where Mass was taking place, people still participated in the liturgy, just like they would on a normal Sunday in their churches. They recited the responses, sang the songs, stood and knelt on the grass. Though Pope Francis’ homily was in Spanish and there was no English translation, everyone was listening as if they could understand every word he was saying. Everyone who wanted to receive holy Communion was able to as well, which was such an honor. It was definitely the biggest Mass I have ever been to, and it made me realize that we are not on this journey of faith alone.

It is a day that I’ll never forget. The images and details are so fresh in my memory, I doubt I could forget them even if I tried. I’m so glad I made the pilgrimage and I would do it again in a heartbeat.

Pope Francis’ visit brought so much excitement to our country, but in particular to our church. Now that he is gone, I hope those feelings continue to live on. I hope people still get excited about their faith. I hope people take to heart what Pope Francis said during his six-day visit. I was blessed to be a part of his historic trip to the U.S. I pray that I am able to exuberate all that Pope Francis brought during his visit. I also pray for our Holy Father that he continues to be such a positive leader for our church. 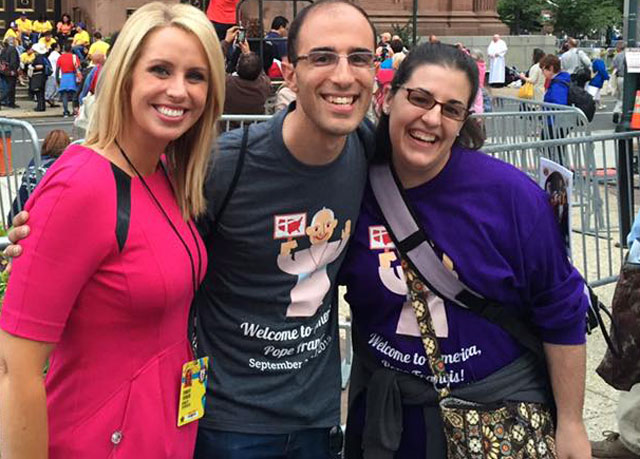