A priest and novice investigate the death of a young nun in the horror movie, 'The Nun' - Catholic Courier 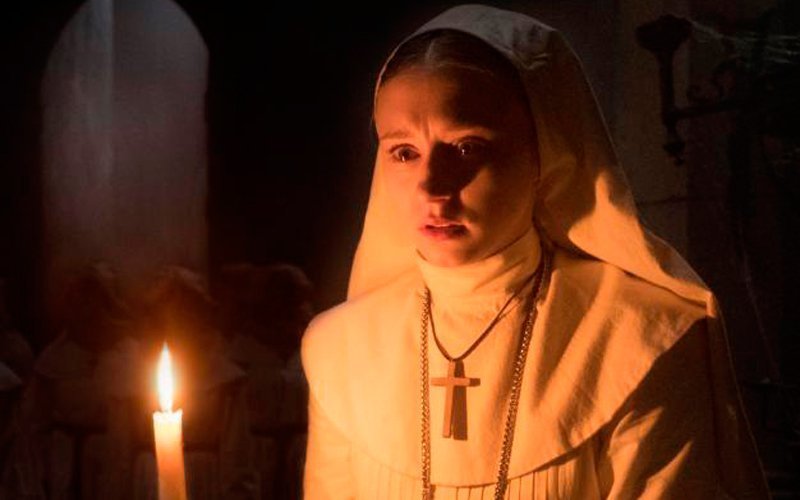 Taissa Farmiga stars in a scene from the movie "The Nun." (CNS photo by Warner Bros.)

NEW YORK (CNS) — “The Nun” (Warner Bros.) is an ambitious undertaking with an immense budget and lush special effects. The apparent aim: to rank as the “That’s Entertainment!” of Catholic-themed horror films. The movie doesn’t, therefore, ask the audience for a whole lot other than attention to all the classic tropes of the genre.

But oh, its questionable and tasteless details. While the movie is reverent in its own way and certainly not gleefully blasphemous as such pictures sometimes are, Catholics knowledgeable about their faith will experience a lot of moments of “Wait, what? That’s not how that works.”

Yes, there’s a creepy white-faced demon nun — first shown as a bit player in “The Conjuring 2” in 2016, now in a starring role — skittering through catacomb tunnels and popping out of the darkness in a sprawling ancient Romanian abbey for an effective series of jump-scares.

And we do like our demons with the pointy teeth and glowing eyes. The rest of it is the familiar Catholic shtick of Ed and Lorraine Warren, the self-styled lay exorcism “authorities” of decades ago, lifted, by director Corin Hardy and screenwriter Gary Dauberman, to the stately heights of the old-time Hammer Studios horror outings. It’s the fifth title in the typically intelligent “Conjuring” franchise.

The plot rests on the backstory, set in 1952, of said demon sister, known as Valak (Bonnie Aarons). When a young nun clutching an ancient key hangs herself in the Abbey of St. Carta, a trio of somber bishops at the Vatican send Father Burke (Damian Birchir) to investigate, and for reasons that, oh, so slowly become apparent, also ask him to bring Sister Irene (Taissa Farmiga), a cheerful novice, with him to this remote and spooky place.

The nuns there are cloistered and observe silence from sunset to sunrise, so there’s not a lot of dialogue for them. More is heard from Frenchie (Jonas Bloquet), a handsome local boy who also contributes comic relief.

The abbey, we learn, was built centuries ago by a Satan-worshiping duke as a gateway to hell. It was eventually taken over and sanctified by Christian knights with the help of a crystal reliquary containing a tiny gold cross said to hold a minuscule amount of the blood of Jesus.

It’s housed women religious ever since. But bombing damage from World War II has somehow shaken the foundations enough to allow demons and restless dead spirits to run rampant again.

The deeply terrified nuns are shown keeping the evil spirits at bay through what they call perpetual adoration, although no tabernacle, host or monstrance is present. Call it a rite that’s wrong. The aforementioned sacred relic, moreover, appears in a key scene toward the end — during which it’s put to use in an indisputably objectionable manner.

There’s also a door inscribed with “Finit hic Deo,” which translates to “Here ends God,” lots of crucifixes which turn upside down whenever Valak drops by and another crucifix that glows red from the intensity of an attempted exorcism. Sister Irene has visions that always end with her hearing the words “Mary points the way.” (In one scene, a statue of the Blessed Mother does, in fact, point the way like a traffic cop).

And of course, there’s some violent telekinesis thrown in for good measure.

Navigating the close boundary line between sacred and profane, sometimes without success, “The Nun” veers into scenes that are likely to make grown viewers of faith slightly uncomfortable, to say the least. As for young and impressionable moviegoers, they should steer clear altogether.

The film contains occult themes, the misguided use of a sacred object, a scene of suicide, some physical violence and gore and a single rough term. The Catholic News Service classification is L — limited adult audience, films whose problematic content many adults would find troubling. The Motion Picture Association of America rating is R — restricted. Under 17 requires accompanying parent or adult guardian.