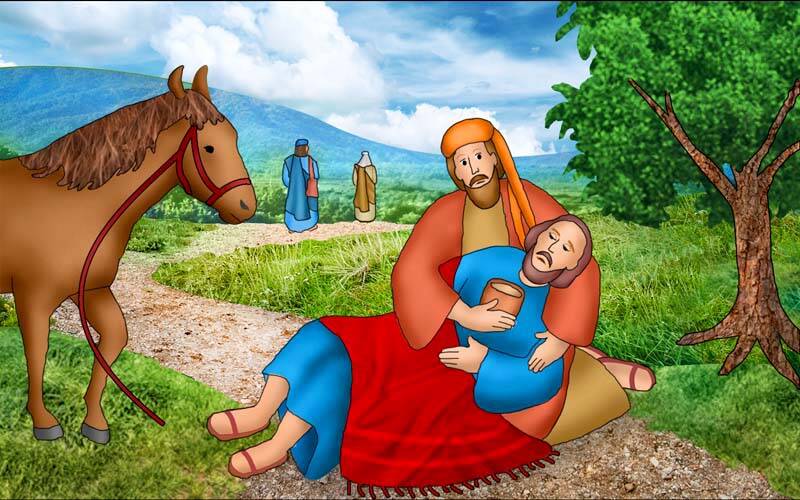 A Samaritan man aids a robbery victim on the road to Jericho
Bible Accent
Saint for Today: St. Ignatius of Loyola
Puzzle

One day, a scholar of the law decided to test Jesus.

He stood up and asked Jesus a question, even though he already knew the answer.

“Teacher, what must I do to inherit eternal life?” he asked.

“What is written in the law? How do you read it?” Jesus replied.

“You have answered correctly; do this and you will live,” he said.

The scholar of the law was disappointed that he had failed in his attempt to test Jesus. So, wanting to justify himself, he asked another question.

“And who is my neighbor?” he wanted to know.

Jesus decided to reply by telling a parable.

He told the story of a man who was traveling the road from Jerusalem to Jericho when he was attacked by robbers.

“They stripped and beat him and went off leaving him half-dead,” Jesus said.

Eventually, another person came down the same road.

“A priest happened to be going down that road, but when he saw him, he passed by on the opposite side,” Jesus said.

Then a Levite came by.

“And when he saw him,” Jesus said, “he passed by on the opposite side.”

A Samaritan man traveling the road saw the robbery victim. He was moved with compassion and stopped to help.

“He approached the victim, poured oil and wine over his wounds and bandaged them,” Jesus said. “Then he lifted him up on his own animal, took him to an inn and cared for him.”

The next day, the Samaritan took out two silver coins and gave them to the innkeeper with these instructions: “Take care of him. If you spend more than what I have given you, I shall repay you on my way back.”

Jesus looked at the scholar of the law.

“Which of these three, in your opinion, was neighbor to the robbers’ victim?” he asked.

“The one who treated him with mercy,” the scholar of the law replied.

“Go and do likewise,” he said.

1. Who wanted to test Jesus?

2. Who helped the robbery victim?

ESSAY: When have you helped someone in need?

There are many places in the New Testament where Jesus talks to the people about mercy.

For example, in Matthew 9, we read that Jesus called a tax collector named Matthew to be one of his apostles. Jesus then went to Matthew’s house and ate with other tax collectors and sinners.

When the Pharisees saw this, they criticized Jesus for associating with such people.

“Those who are well do not need a physician, but the sick do,” Jesus responded. “Go and learn the meaning of the words, ‘I desire mercy, not sacrifice.’ I did not come to call the righteous but sinners.”

In Luke 6, during a talk that we call the Sermon on the Plain, Jesus taught the people that they should love their enemies and do good to those who hate them.

“Be merciful, just as (also) your Father is merciful,” he said.

And in Matthew 5, during a talk that we call the Sermon on the Mount, Jesus shared the beatitudes with the people.

“Blessed are the merciful, for they will be shown mercy,” was one of the beatitudes he taught them.

Inigo Lopez de Loyola was born in Spain in 1491. He worked as a page and then became a soldier.

He was wounded in battle, and while he was recovering, he read about Jesus and the saints. He experienced a personal conversion, and he wound up making a long retreat and traveling to Jerusalem.

For 10 years, he studied in Barcelona and Paris, changing his name to Ignatius and associating with like-minded men. He and his friends founded the Society of Jesus, also known as the Jesuits, and Ignatius became the new order’s superior general.

Ignatius also wrote the “Spiritual Exercises,” which is still a popular guide. He died in 1556, and we remember him on July 31.