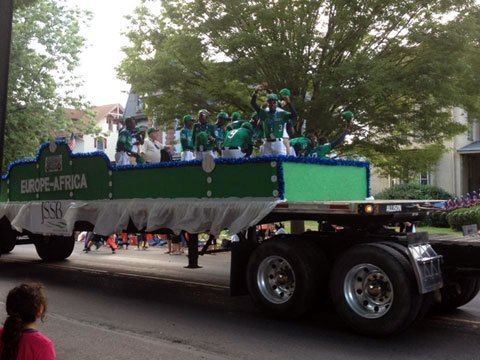 Players from the Uganda team wave to the crowd during the Little League World Series Grand Slam Parade Aug. 16. The parade is the kickoff to the 10 day series which is held annually in Williamsport, Pa.

Labor Day is over, kids are back in school, and the apple and pumpkin flavors are already on store shelves and in coffee shops. They’re all signs that another summer is over.

There are always some great stories that come out of Williamsport. Last year, it was Mo’na Davis, who captured headlines for becoming the first girl to earn a win and to pitch a shutout in Little League World Series history. This year, there was a lot of excitement for the Red Land Little League team from Lewisberry, Pa., which captured the U.S. title and played in the championship game in front of more than 45,000 people.

However, this year, it was the team from Uganda that captured my attention. It was only the country’s second appearance in the World Series and most of the boys on the team just started playing baseball. Unlike the U.S. teams, they came to Williamsport leaving their families back in Uganda. At 11 to 12 years old, they showed great maturity in the midst of tough competition. Despite the final score, they always had smiles on their faces. Photographers captured great moments with the young Uganda team members, who showed sportsmanship well beyond their years.

The story of their assistant coach also is inspiring. Evan Petty, a Syracuse University graduate, moved to Uganda to work with these boys after he watched them play in Williamsport in 2012.

Major league sports today are all about wins and million-dollar contracts. There is little attention given to sportsmanship. Maybe professional athletes could learn a few lessons from these Little Leaguers.