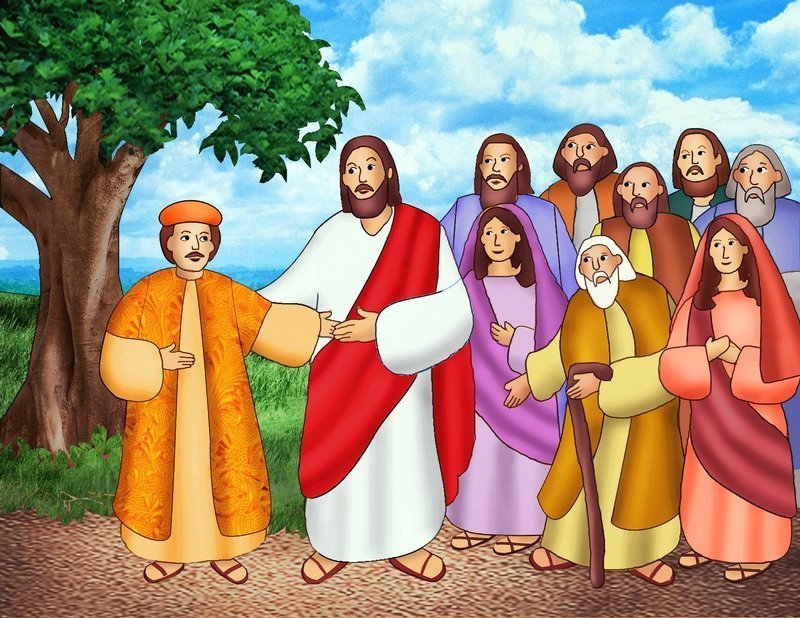 One day, Jesus and his apostles were traveling toward the city of Jericho.

Along the way, a huge crowd of people started to follow them. The crowd was so loud that a blind beggar on the side of the road wanted to know what was going on.

“Jesus of Nazareth is passing by,” someone told him.

So the man called out and asked Jesus to heal him. Jesus stopped and returned the man’s sight.

As Jesus and his friends came into Jericho, the noisy crowd caught the attention of a wealthy chief tax collector named Zacchaeus.

In those days, tax collectors were hated because they worked for the Roman Empire, which occupied Israel. They also charged more taxes than what the people owed and kept the extra money for themselves.

Zacchaeus had heard about Jesus and wanted to see him. But he was not a very tall man, so he could not see over the heads of the people in the crowd.

He was determined to find a way to see over the crowd. He looked around for something to stand on, then finally climbed a sycamore tree and waited for Jesus to pass by.

As Jesus walked past the sycamore tree, he stopped and looked up.

“Zacchaeus, come down quickly,” Jesus said, “for today I must stay at your house.”

Zacchaeus scurried down from the sycamore tree. He was used to being shunned by the people of Jericho, who wanted nothing to do with him. He was very excited and happy that someone as good and kind as Jesus thought he was worthy enough to visit.

The people in the crowd were shocked.

“He has gone to stay at the house of a sinner,” they grumbled to each other.

Zacchaeus gave Jesus a grateful look. Jesus’ kindness made him want to change his sinful ways.

“Behold, half of my possessions, Lord, I shall give to the poor, and if I have extorted anything from anyone I shall repay it four times over,” Zacchaeus said.

1. What city was Jesus traveling through?

2. What did Zacchaeus do so he could see Jesus?

In the Gospel of Luke, we read about two wealthy men and their encounters with Jesus.

In Luke 19, Jesus’ actions transformed the life of Zacchaeus. After meeting Jesus, Zacchaeus vowed to give up his sinful ways, give half of his wealth to the poor and return four times the amount of money to those whom he had cheated.

In Luke 18, we read about a wealthy official who wanted eternal life in heaven and asked Jesus how to inherit it.

Jesus told him to follow the law, which the man said he had done since his youth. Jesus then said there was one thing left for the man to do:  “Sell all that you have and distribute it to the poor, and you will have a treasure in heaven. Then come, follow me.”

The man went away sad, because he had many possessions that he was not willing to part with.

In the end, it was the sinner Zacchaeus who realized that following Jesus was more important than having earthly possessions.

St. Nerses I was an Armenian who lived in the fourth century. After his wife died, he worked in the court of the Armenian king and received holy orders. He eventually became bishop of Armenia.

Nerses told the king he was wrong for murdering his wife, so the king banished him. After the king was killed in battle, Nerses returned.

The new king, however, was such a bad man that Nerses did not allow him to enter the church. The new king did not like this, so he invited Nerses to dinner and poisoned him.