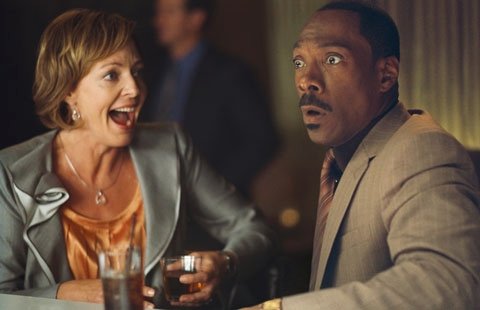 NEW YORK (CNS) — Silence may indeed be golden. But the comedy "A Thousand Words" (DreamWorks) — which lumbers forth from an elaborate premise whereby a fast-talking literary agent must learn to hold his peace or kick the bucket — turns out to be about 90 minutes worth of barely alloyed lead.

Eddie Murphy plays slickster Jack McCall, whose career marketing manuscripts brings him into contact with nice-guy guru and author Dr. Sinja (Cliff Curtis). Jack’s habitual insincerity, however, soon puts him on Sinja’s (and, so we’re meant to infer, the cosmos’) bad side and he finds himself cursed.

According to the terms of the jinx, each word Jack speaks causes a leaf to fall from a tree that has magically sprouted in his backyard. Once the branches are bare, he’ll die. By the time Jack figures all of that out — and the audience, though wearied, is well ahead of him on this — he has only the titular amount of vocabulary left.

There’s mugging galore, but little hilarity in director Brian Robbins’ barren comedy. And, when screenwriter Steve Koren’s script turns serious about two-thirds of the way through, it mixes fruitful messages about marital fidelity and the importance of family life with shady New Age-style spirituality.

Thus, Jack’s desperate efforts to become charitable, which see him tossing baguettes of French bread to Skid Row hobos and donating his expensive watch to fund-raising nuns, only to take it back again, gain him nothing. But reaching out to Caroline and to his Alzheimer’s-afflicted mom (Ruby Dee) and resolving his long-standing emotional impasse with his deceased father, taken together, do — so to speak — the trick.

Along the way, Sinja offers some gobbledygook guidance, and Caroline dons leather to "spice up" — and save — her marriage. Though she briefly handcuffs Jack, it’s the folks in the audience who may feel shackled by these flimsy proceedings.

The film contains mature content, including scenes of aberrant sensuality within marriage and incidental gay characters, a few uses of profanity, at least one instance of the F-word, considerable crude and crass language and an obscene gesture. The Catholic News Service classification is A-III — adults. The Motion Picture Association of America rating is PG-13 — parents strongly cautioned. Some material may be inappropriate for children under 13.