People, like trees, are known by their fruit, Jesus said - Catholic Courier 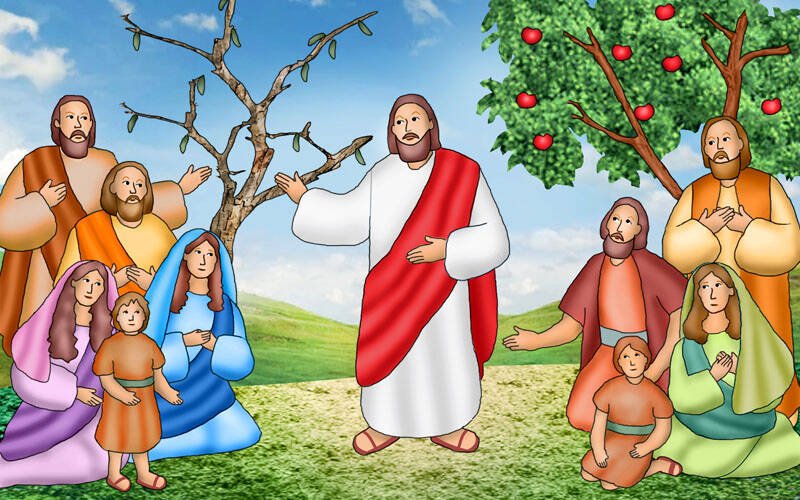 People, like trees, are known by their fruit, Jesus said.

One day, Jesus came down the mountain to where a huge crowd had gathered to be healed by him.

Jesus raised his eyes toward his apostles and began to speak.

“Rejoice and leap for joy on that day! Behold, your reward will be great in heaven. For their ancestors treated the prophets in the same way.”

Jesus explained that people should love their enemies, bless those who curse them, pray for those who mistreat them, do good to those who hate them and be merciful. He told them not to judge and condemn others and to be forgiving.

“For the measure with which you measure will in return be measured out to you,” he said.

“Why do you notice the splinter in your brother’s eye, but do not perceive the wooden beam in your own?” he asked.

Jesus then used the example of a tree to make a point.

“A good tree does not bear rotten fruit, nor does a rotten tree bear good fruit. For every tree is known by its own fruit. For people do not pick figs from thornbushes, nor do they gather grapes from brambles,” he explained.

“A good person out of the store of goodness in his heart produces good, but an evil person out of a store of evil produces evil; for from the fullness of the heart the mouth speaks,” he said.

1. What did the crowd want Jesus to do?

2. What object did Jesus refer to in making a point?

TRIVIA: Jesus said no disciple is superior to what? (Hint: Luke 6:40)

There are many places in the Bible where Jesus used agricultural references to make a point.

For example, in John 15, Jesus refers to himself as a vine and God as the vine grower.

“He takes away every branch in me that does not bear fruit, and every one that does he prunes so that it bears more fruit,” Jesus said. “I am the vine, you are the branches. Whoever remains in me and I in him will bear much fruit, because without me you can do nothing.”

In Mark 4, Jesus compared the kingdom of heaven to a mustard seed.

“When it is sown in the ground, (it) is the smallest of all the seeds on the earth,” he said. “But once it is sown, it springs up and becomes the largest of plants and puts forth large branches, so that the birds of the sky can dwell in its shade.”

And in Luke 8, Jesus told of a man who went out to sow his seeds.

“And as he sowed, some seed fell on the path and was trampled, and the birds of the sky ate it up,” he said.

“Some seed fell on rocky ground, and when it grew, it withered for lack of moisture. Some seed fell among thorns, and the thorns grew with it and choked it,” he continued.

“And some seed fell on good soil, and when it grew, it produced fruit a hundredfold,” Jesus said.

St. Louise de Marillac was born in France in 1591 and married an official of the royal court.

Following her husband’s death in 1625, Louise co-founded the Daughters of Charity with St. Vincent de Paul, whose charitable works she supported. She drew up the first draft of the order’s rule.

By the time she died in 1660, the order had established 40 houses in France, sheltered hundreds of women and looked after the sick and poor.

We remember her on March 15.

your, in, behold, will, heaven, be, great, reward

Behold, your reward will be great in heaven.