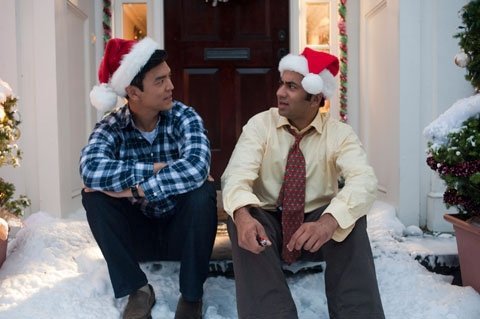 NEW YORK (CNS) – Viewers of faith beware: In its largely vain pursuit of laughs, the comedy sequel "A Very Harold & Kumar 3D Christmas" (Warner Bros.) stoops not only to sexual excess but to anti-Catholic animus and even blasphemy.

The result — as written by Jon Hurwitz and Hayden Schlossberg and directed by Todd Strauss-Schulson — is a consistently vulgar, intermittently loathsome insult to the holiday.

The plot — such as it is — begins with reformed pothead Harold (John Cho) and unrepentant stoner Kumar (Kal Penn) accidentally burning down the former’s family Christmas tree. Since the now-married Harold’s intimidating Hispanic father-in-law (Danny Trejo) is a devotee of all things Yule — and grew the destroyed stately fir himself — this sets off a frenzied but rambling quest for a replacement.

Along the journey that follows, a secondary character is revealed to have a rendezvous with a teenage virgin named Mary who ardently longs to be deflowered on Christmas Eve. Similarly, when the titular duo concocts a plot to steal a church’s evergreen, their imagined scenario involves pornographic images of lesbian nuns as well as pedophile priests chasing choirboys. Another fantasy is set in heaven where a playboy version of Jesus appears, accompanied by two topless angels.

That’s not to mention the attempt to mine amusement from repeated incidents where a toddler is inadvertently made high on a variety of narcotics or the claymation sequence that exploits 3-D in a manner the fertility gods of pagan antiquity might have envied.

The general tastelessness on display, but more particularly the assault on Catholic sensibilities, make it sobering to reflect that Penn left his job as an associate director of the White House Office of Public Engagement to be involved in this misbegotten mess.

Anything less engaging than the defamatory interludes and overall "nothing sacred" outlook of his latest project would be difficult to imagine.