A week after being hit by Hurricane Maria, Puerto Rico begs for help - Catholic Courier 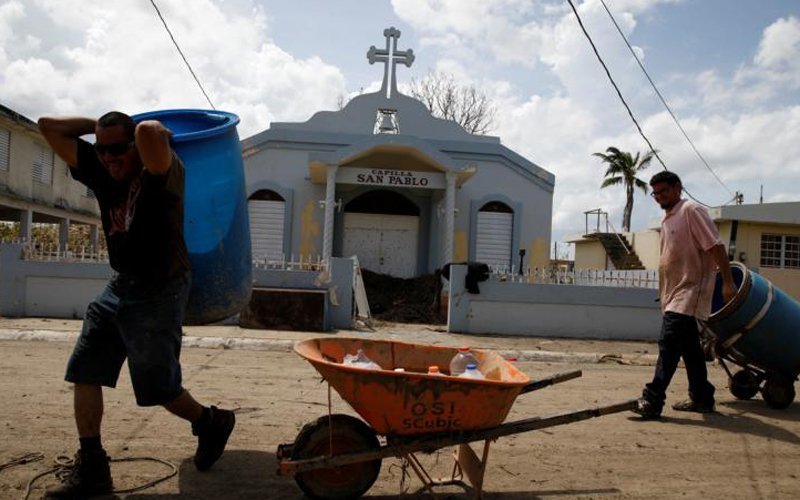 Men carry a container filled with water past a damaged church Sept. 24 after the area was hit by Hurricane Maria in Toa Baja, Puerto Rico.

WASHINGTON (CNS) — More than a week after Hurricane Maria devastated Puerto Rico, much of the island remained without communication and in desperate need of humanitarian aid.

News programs have been broadcasting about long lines of travelers, who have little food or water, and are desperate to get off the island at the San Juan airport to no avail.

But the scene of destruction outside the airport is even more stark: An island whose dense tropical landscape, along with its infrastructure, towns and cities, has been greatly stripped by winds that reached 155 mph.

Catholic Church groups have mobilized to send help. Some organizations, however, have reported problems mobilizing the aid out of airports and into the places and people who need them.

Officials say Hurricane Maria left 16 dead in Puerto Rico, 27 dead in Dominica and one in the U.S. Virgin Islands. But accurate information has been hard to come by since cellphone service and electricity, along with access to water and fuel, have been knocked out. Many roads into rural areas still are blocked by debris, making it difficult to access those who live there.

Many Puerto Ricans in the mainland U.S. have been making desperate pleas on social media to see if others can give them information about relatives or conditions in town or cities where their relatives live but which remain without communication.

President Donald Trump is set to visit Puerto Rico, a U.S. territory of 3.4 million, as well as the U.S. Virgin Islands on Oct. 3. He has largely been criticized for what some perceive as a slow humanitarian response and for spending time tweeting against athletes as Puerto Rico suffered. But when he got around to tweeting about the island’s misery, he also offended many by bringing up its debt, including debt to Wall Street, as well as the island’s pre-existing failing infrastructure.

It took a week for the U.S. to send a plane carrying 3,500 pounds of water as well as food and other supplies to the island, but the president said, “It’s on an island in the middle of the ocean. … You can’t just drive your trucks there from other states.” A hospital ship also has been sent.

Scarcity of food, water and fuel is rampant. The deaths of two patients in intensive care at a San Juan hospital were blamed on lack of fuel.

On Sept. 27, the Trump administration said it would not waive shipping restrictions to get fuel and supplies to island, angering politicians such as U.S. Sen. John McCain, R-Arizona, who asked the Department of Homeland Security to waive the restrictions known as the Jones Act.

Many, such as New York Cardinal Timothy M. Dolan, are in the meantime offering Masses as well collecting donations to help in a long recovery ahead for Puerto Rico.

Cardinal Dolan will celebrate a Mass in Spanish at St. Patrick’s Cathedral Oct. 8, to “express prayerful solidarity with the people of Puerto Rico and Mexico — and their relatives and friends in New York — in the wake of the natural disasters that have ravaged both lands this month,” according to an article in the archdiocesan newspaper, Catholic New York.