A woman who showed love is forgiven - Catholic Courier 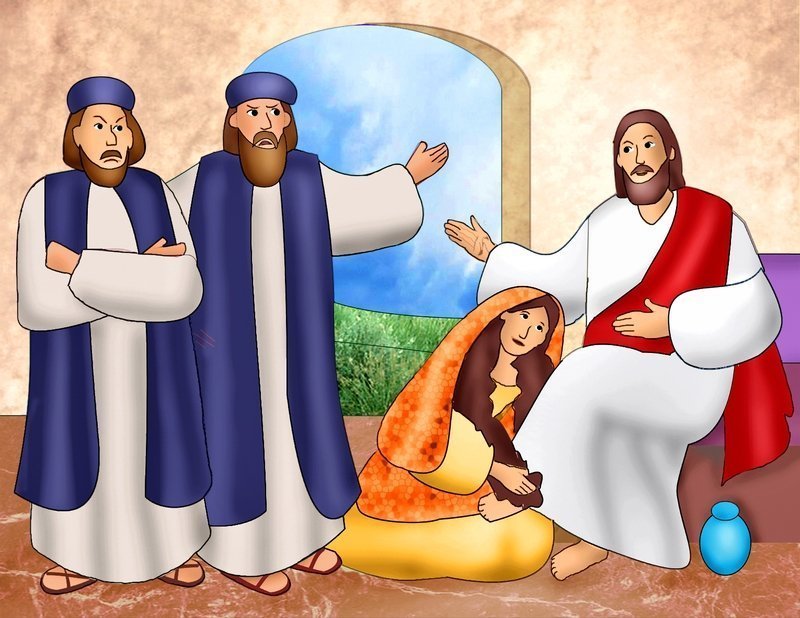 One day, a Pharisee named Simon invited Jesus to come to his house for dinner.

The two men went to Simon’s house and reclined at the dinner table. Just then, a sinful woman, who heard that Jesus was visiting Simon, came into the room.

The woman was very upset. She fell to her knees and used her tears to wash Jesus’ feet. She kept crying as she wiped his feet dry with her long hair and anointed them with the ointment she had brought with her.

All this time, Simon was watching the woman, but he didn’t say a word to her or Jesus. Instead, he thought, “If this man were a prophet, he would know who and what sort of woman this is who is touching him, that she is a sinner.”

Even though Simon did not speak his words out loud, Jesus knew what he was thinking.

“Simon, I have something to say to you,” Jesus said.

The Lord went on to tell the story of two men, who each owed money to the same person. One man owed 50 days’ wages, while the other owed 500 days’ wages. However, neither man could pay back what he owed. So the person who was owed the money decided to forgive each man his debt.

“Which of them,” Jesus asked Simon, “will love him more?”

Simon thought for a moment.

“The one, I suppose, whose larger debt was forgiven,” he replied.

Jesus nodded his head in agreement. Simon had given the correct answer.

Then Jesus called Simon’s attention to the sinful woman.

“Do you see this woman?” he asked “When I entered your house, you did not give me water for my feet, but she has bathed them with her tears and wiped them with her hair. You did not give me a kiss, but she has not ceased kissing my feet since the time I entered. You did not anoint my head with oil, but she anointed my feet with ointment. So I tell you, her many sins have been forgiven; hence, she has shown great love. But the one to whom little is forgiven, loves little.”

Then he turned to the sinful woman and told her that her sins had been forgiven.

“Your faith has saved you; go in peace,” Jesus said.

1. Who invited Jesus to his house for dinner?

2. What did the sinful woman show toward Jesus?