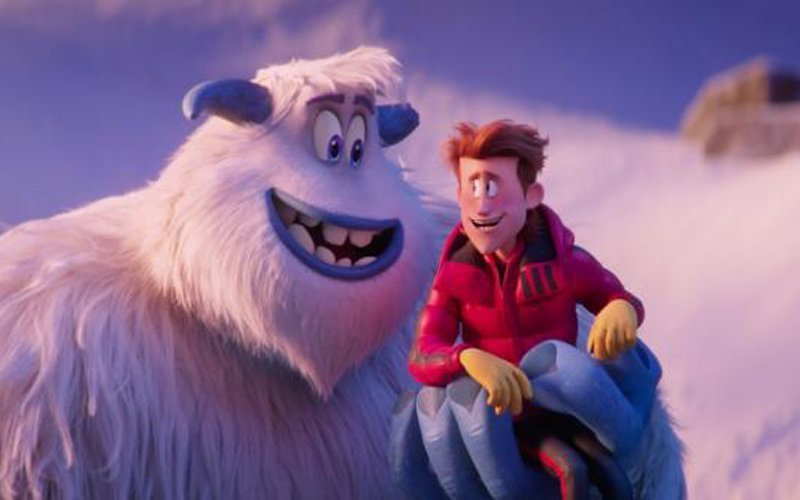 Characters are shown in a scene from the animated movie "Smallfoot." The Catholic News Service classification is A-II -- adults and adolescents. The Motion Picture Association of America rating is PG -- parental guidance suggested. Some material may not be suitable for children.(CNS photo by Warner Bros. Pictures)

NEW YORK (CNS) — Turning the legend of Bigfoot on its head with plenty of laughs along the way comes the animated musical comedy “Smallfoot” (Warner Bros.).

While definitely entertaining on the surface, the film — co-written by Karey Kirkpatrick and Clare Sera, and directed by Kirkpatrick (“Over the Hedge”) — involves underlying themes that Catholic parents will want to address with their kids.

The movie opens in a village high in the mountains where a contented group of yetis live. They’re a happy community, satisfied with the simple tasks of their day-to-day lives.

Led by Stonekeeper (voice of Common), they have a strict code of conduct: They must live according to the stones, which have come via inspiration to generations of Stonekeepers’ predecessors. As far as the yetis are concerned, the stones are the truth and questioning them is not allowed.

Migo (voice of Channing Tatum) dreams of succeeding his father, Dorgle (voice of Danny DeVito), as the village’s gong-ringer, a very important post since the daily sounding of the gong serves as a communal reveille.

Frustrated that his training isn’t going as well as he’d hoped, Migo takes a walk on the mountain to ease his disappointment. While there, he witnesses a plane crash and beholds something he didn’t believe existed: a smallfoot, that is, a human.

Rushing back to the village, Migo tells his story but when the yetis investigate, the plane and survivor are gone. Migo’s revelation has everyone worried because the stones tell them there is no such thing as a smallfoot. But Migo knows what he saw and for his insistence that the stones are wrong, Stonekeeper banishes him from the village.

Wandering the mountain, he comes upon Meechee (voice of Zendaya), Stonekeeper’s daughter, who secretly heads a group of village oddballs calling themselves the SES, for Smallfoot Evidentiary Society. Meechee believes with all her heart that humans exist, and has been collecting evidence, including a tiny “scroll of invisible wisdom” (which is actually just a roll of toilet paper).

Migo decides to risk it all and go below the clouds to look for proof.

In the human world below, Percy (voice of James Corden) has been struggling to make the nature-themed television show he hosts a success. The ratings have dropped recently and his producer, Brenda (voice of Yara Shahidi), is ready to call it quits.

Percy is willing to do whatever it takes to make his program a hit, even if that means getting someone to dress up in a yeti costume so he can capture the resulting “discovery” on film. When Migo wanders into the town, Percy thinks it’s Brenda in disguise. Realizing his mistake, terrified Percy passes out, enabling Migo to wrap him in a sleeping bag and carry him back up the mountain.

When Migo presents Percy to the village, their whole way of thinking is thrown into doubt. If a smallfoot does exist, does that mean the stones could be wrong? As Migo and Percy become friends, Percy’s presence among the yetis brings to light some dark truths as they begin to ask questions for the first time.

Adults may cringe a bit at the treatment of beliefs. After all, the stones evoke the Ten Commandments as well as other truths considered “set in stone.”

The false opposition the main story line presents between revealed truth and those empirical facts that can be discovered through scientific investigation is something parents will want to clarify with their children in an age-appropriate manner. The film disappoints in that it portrays discovering the truth through experience as a reason to dismiss revelation.

Youngsters are not equipped to navigate the subtleties at work here. But teens will be able to enter into a discussion in which the importance of asking questions as an essential part of learning — very much celebrated in “Smallfoot” — is balanced by an understanding of revelation as the basis for our experience of faith.

Why, for example, do we put our trust in what God has revealed? Is there an inevitable conflict between science and religion — or can these two channels of truth coexist in harmony?

“Smallfoot” also focuses on the essential value of integrity, as it ebbs and flows in the character of Percy. This could also serve as the cue for a rewarding family dialogue.

Considered strictly from an aesthetic point of view, there’s much in the picture to appreciate. The actors, for instance, all inhabit their characters with great aplomb. Tatum brings a boyish quality to Migo’s wondering, and Zendaya gives Meechee the right balance of gentleness and excitement.

As Percy, Corden kicks his comedic sense up a notch, poking fun at his own television background with a great rant about ratings. And “Smallfoot” tickles the funny bone throughout.

The film contains a misguided portrayal of religion and some rude humor. The Catholic News Service classification is A-II — adults and adolescents. The Motion Picture Association of America rating is PG — parental guidance suggested. Some material may not be suitable for children.