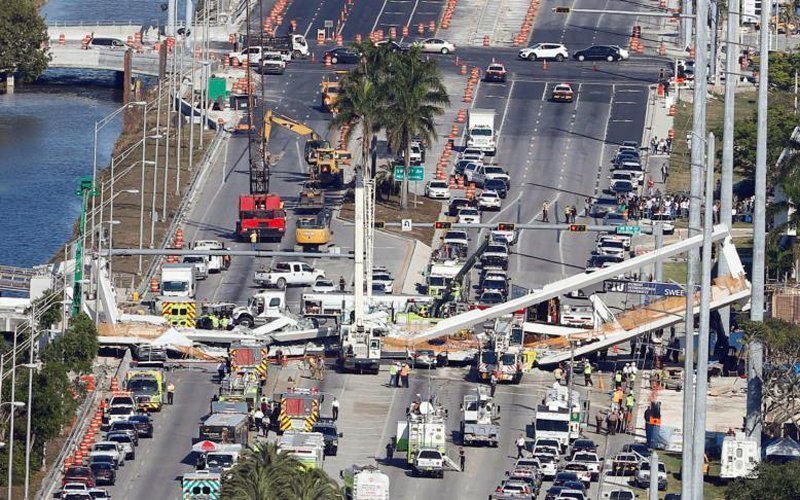 An aerial view shows a pedestrian bridge that collapsed March 15 at Florida International University in Miami. Authorities in Florida's Miami-Dade area said at least six people have died but the number could rise as they search through the rubble. (CNS photo by Joe Skipper/Reuters)

WASHINGTON (CNS) — Authorities in Florida’s Miami-Dade area said at least six people have died but the number could rise as they search through the rubble of a pedestrian bridge that collapsed March 15 near Florida International University.

Via Twitter, the Archdiocese of Miami said it was “saddened to learn of the tragic event that has affected our community this afternoon. Please join us in praying for everyone involved.”

The archdiocese also said March 15 that it was praying for victims, those injured, their loved ones, first responders and the university community.

News reports said that because of a red light, various cars had stopped under the bridge, which had been lifted into place just days before it collapsed. Some are questioning the construction method used to build the 960-ton structure meant to bring greater safety to those trying to cross the eight lanes of traffic below.

Juan Perez, director of the Miami-Dade Police Department, said March 16 that crews were working to break some of the bigger pieces of concrete into smaller ones to get to the vehicles and those trapped in them underneath.

“Our first priority is getting to those victims,” he said.

Authorities said 10 people with injuries were at area hospitals, with two of them in critical condition.