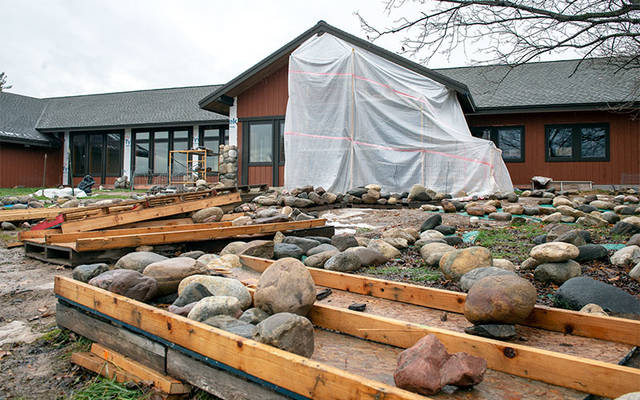 An additional entrance to the Abbey of the Genesee’s gatehouse was added to accommodate a relocated bread store and new visitor amenities. (Courier photo by Jeff Witherow)

Overseeing the renovation is McKinnon Construction of Honeoye Falls, the same firm that refurbished the abbey’s church in 2014. Funding for the project received an unexpected boost around the time it was being launched — a $500,000 bequest from Mary Ann Mans, a longtime high-school teacher in Rochester who died in January 2014. Yet even with that sizable donation, Father Slater said that several hundred thousand more dollars are required to meet the project’s $1.2 million price tag, and any donations are welcomed.

Through a monastic guest program, men can live as guests for one to six months with the abbey’s 23 priests and brothers belonging to the Cistercian of the Strict Observance, or Trappist, order. Participants would spend all their time inside the cloister, taking full part in the abbey’s lifestyle, which includes working in the bakery and prayer several times per day, as well as limited conversation and phone and computer usage, and no television or radio.

“It’s a wonderful opportunity,” Father Slater said of the immersion initiative, which is open to unmarried Catholic men under age 50. “The conditions are optimal for a growing intimacy with God.” He added that anybody interested should contact him at isaacslater@geneseeabbey.org.