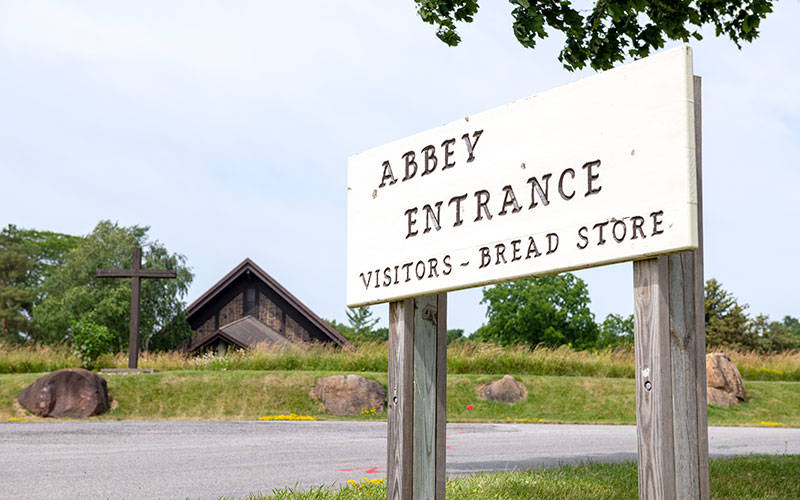 The entrance to the Abbey of the Genesee is seen June 25 in Piffard, Livingston County. (Courier photo by Jeff Witherow)

Abbey of the Genesee’s monks are well-known for being welcoming to visitors, yet still maintaining their cloister status as members of the Cistercians of the Strict Observance — or Trappist — religious order.

That dynamic has been absent for more than a year, with the coronavirus pandemic forcing the abbey into suspending public access. However, as of July 1, the monastery in northwest Livingston County will at last begin its reopening process.

According to Father Isaac Slater, OCSO, the abbey’s prior, its church will be open for private prayer seven days per week from 8:30 a.m. to 4 p.m. each day. In addition, the abbey’s bread store will welcome customers from 10 a.m. to 4 p.m. Tuesday through Saturday. The store features the famous Monks’ Bread along with other products from Abbey of the Genesee’s on-site bakery.

The new schedule will allow the general public to return to the abbey, located at 3258 River Road in the hamlet of Piffard, for the first time since mid-March 2020. Father Slater said that abbey leadership feels confident about reopening because the monks were vaccinated in early 2021 and the Centers for Disease Control and Prevention has recently relaxed its guidance regarding public gatherings.

Still, Father Slater noted that guests will be required to wear masks and maintain social distancing while indoors, regardless of whether they’ve been vaccinated. He added that the monks aren’t hearing confessions or giving in-person spiritual direction just yet; other popular activities involving the public, such as Sunday Mass and retreats, remain on hold as well. He said that all those offerings will be reinstituted “hopefully before long.”

Father Slater explained that the abbey is maintaining several health precautions at this time because many of the monastery’s 23 priests and brothers are elderly and at high risk against such infectious diseases as COVID-19.

“Because we’ve chosen to care for our older members, we’re having to be in the position of being extra cautious,” Father Slater said, adding that “even if they had a mild case of COVID, it could still be life-threatening.”

Yet he also emphasized that welcoming back the public, even partially, is a big step because it marks a return to the monks’ cherished tradition of providing hospitality.

“We’re looking forward to having guests with us again to share the peace of this place,” Father Slater said. “You definitely feel there’s something missing when the guests aren’t here. That’s one of the real joys of our life — we’re kind of stewards of peace, and you feel that peace come through when the guests are here.”

Although the Trappist community is physically isolated from the world around it, Father Slater said that the priests and brothers have been keenly aware of the worldwide devastation wreaked by COVID-19. He noted that its severity hit close to home when a cohort’s parents both died from the coronavirus, with that monk unable to see them in the hospital because no visitors were allowed.

“We were very aware of how people were suffering, and were praying for them all the time — praying for the world, praying for people,” Father Slater said, noting that throughout the pandemic, the monks have continued to come together several times per day for regularly scheduled prayer — including a noon slot for which the public can join in beginning July 1 — as part of their lifelong commitment to prayer, work and study in accordance with the Rule of St. Benedict.

Father Slater said that the abbey has still maintained a limited level of spiritual connection with the public during the pandemic, with some monks ministering via telephone and computer and the monastery’s scenic grounds remaining available for outdoor reflection and prayer.

Abbey of the Genesee’s bread operation, meanwhile, has continued uninterrupted because it is deemed an essential service; the monks produce close to 40,000 loaves of bread per week to be sold in New York and surrounding states. Father Slater said that sales from the abbey’s online store — which offers the option of home delivery — has grown “astronomically” during the COVID-19 crisis.

Also during the past year, Father Slater noted, several men have inquired about potential vocations. He observed that the isolation brought about by various shutdowns may well have resulted in vocation-related thoughts rising to the surface.

“They might have been thinking about it more as they spent more time in solitude,” Father Slater explained.

EDITOR’S NOTE: For updates on Abbey of the Genesee’s reopening, as well as other details, visit https://geneseeabbey.org or call 585-243-0660.