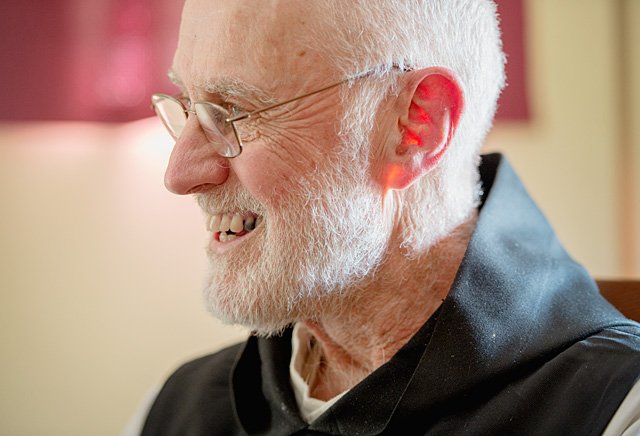 Brother Anthony Weber, OCSO, left for the Abbey of the Genesee shortly after graduating from Rochester's Aquinas Institute in 1956, and he's been there ever since. Scroll to the bottom of this page to learn more about Brother Anthony's journey.

EDITOR’S NOTE: Inspired by Pope Francis’ declaration of the Year of Consecrated Life, this is the fifth installment in a series on religious communities in the Diocese of Rochester.

PIFFARD — As a cloistered community, the 10 priests and 15 brothers residing at Abbey of the Genesee are largely sealed off from the rest of the world.

But that doesn’t mean they’re inaccessible — far from it, in fact.

Members of the public are not only allowed, but strongly encouraged, to visit the abbey. Offerings include Mass, Liturgy of the Hours, retreats, prayer and discussion groups, shopping at the bread store and religious bookstore, and simply taking peaceful walks on the monastery’s spacious grounds in western Livingston County.

"We don’t have much day-to-day contact with the diocese, but I think we’ve always felt we’re part of the diocese," said Father Gerard D’Souza, OCSO, who is abbot, or leader, of the monastery. "Our life of prayer and being the presence of contemplative life in this diocese — it’s a relationship that’s both separate and yet connected, because so many from the diocese are connected with this place."

The connection extends back to April 1951, when the first monks arrived in the hamlet of Piffard, four miles north of Geneseo. Belonging to the worldwide Order of Cistercians of the Strict Observance, these men are more commonly known as Trappists. They adhere to a life of prayer, work and study, in accordance with the Rule of St. Benedict.

Yet Abbot D’Souza pointed out that hospitality is another key facet of the Benedictine rule. The abbey’s 2,400-acre complex is an annual destination for thousands from this diocese and beyond. It is open each day from 2 a.m. to 7 p.m., with all the monks congregating five times per day for prayer and song beginning at 2:25 a.m. Mass is at 6 a.m. daily and at 9:30 a.m. Sunday.

Visitors are invited to all gatherings in the abbey’s church, which reopened March 25 after an 10-month renovation and features such improvements as more comfortable seating, easier accessibility for guests, a new pipe organ and upgraded church furnishings.

At the bread store, the famous Monks’ Bread is available for purchase as are other products from the abbey’s bakery, which produces nearly 40,000 loaves of bread each week to be sold in New York and surrounding states. Over the years baking has supplanted farming as the chief source of income for the Piffard monks, who are self-supporting.

In keeping with their cloistered lifestyle, Abbey of the Genesee residents have limited contact with the public. Yet Brother Anthony Weber, OCSO, the abbey’s vocations and novice director, said the monks are available for confession and to give spiritual direction, particularly about vocations.

Trappist priests and brothers are only permitted to leave the abbey for such reasons as doctor appointments or to visit family. Monks also must be limited in their conversation, speaking only briefly and if that is deemed helpful or useful.

Controlled Internet usage, such as accessing e-mail and the abbey’s website, is allowed. The monks also may read newspapers, use the telephone, and view videos and DVDs, but do not watch television. Brother Weber noted that the deciding factor for media consumption is based on, "Will it help in our vocation or hinder our vocation?"

"The very first word of St Benedict’s rule is ‘listen,’" he said. "If you’re not silent, you can’t hear."

"It’s the gateway to encountering the deeper mysteries of life and ultimately God," said Abbot D’Souza, who arrived at Abbey of the Genesee in 1992 and has been its leader since 2012. He also pointed out that the monks’ life of prayer is not for themselves alone, but an apostolate for the world.

Brother Weber, 77, who arrived at the abbey in 1956, is one of its longest-tenured residents. He moved there upon graduating from Aquinas Institute in Rochester, saying he was drawn to monastic life as he came to fully appreciate all God had done for him.

"This is my response," he said.

Brother Weber and Abbot D’Souza acknowledged that their flock contains a mix of personalities who must learn to live, work and pray together 365 days a year in a regimented setting with few creature comforts. Even so, they said that the priests and brothers form a profound bond.

"What joins us as a community is not blood or natural affinity for each other, but a deeper affinity in Christ," Abbot D’Souza said.

EDITOR’S NOTE: Abbey of the Genesee is located on River Road, just off Route 63. Visit http://www.geneseeabbey.org or call 585-243-0660 for more information.

Click below to hear Brother Anthony Weber tell the story of his calling to be a Trappist monk.