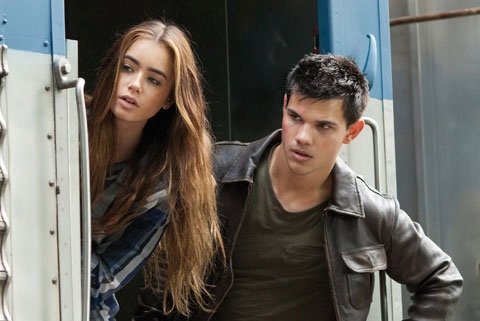 NEW YORK (CNS) — Though presumably intended as a date movie for the high school set, the humdrum romantic adventure "Abduction" (Lionsgate) features scenes of violence and an amount of vulgar language that will likely give the parents of many a freshman and sophomore pause.

On the plus side, director John Singleton’s far-fetched expedition mostly eschews gore — though not some bone-crunching martial arts encounters — while the youthful couple at the heart of the story successfully resists the temptation to turn the unexpected journey they share as the movie unspools into a premature honeymoon.

Perhaps on that basis, some upperclassmen at least can hope for a parental green light.

Assigned to collaborate on a sociology project about abducted children, the two stumble across evidence that Nathan himself may have been a victim of the crime, and that the strict but loving couple (Jason Isaacs and Maria Bello) who have raised him may not, in fact, be his real parents.

These revelations lead the youngsters into a web of international intrigue and they’re soon on the lam, busily dodging a team of CIA agents (led by Alfred Molina) and evading a Serbian assassin named Kozlow (Michael Nyqvist). In between the shootouts and the narrow escapes, though, they do manage to find time to kiss, cuddle and coo.

Given that the gunplay is kept stylized, and that Nathan and Karen do not make the use they could of their distance from home and their proximity to each other, "Abduction" may possibly be acceptable for mature adolescents, the potentially objectionable elements listed below notwithstanding.

The film contains considerable, but largely bloodless, violence; brief nongraphic sensuality; at least one use of profanity and of rough language; and about a dozen crude or crass terms. The Catholic News Service classification is A-III — adults. The Motion Picture Association of America rating is PG-13 — parents strongly cautioned. Some material may be inappropriate for children under 13.