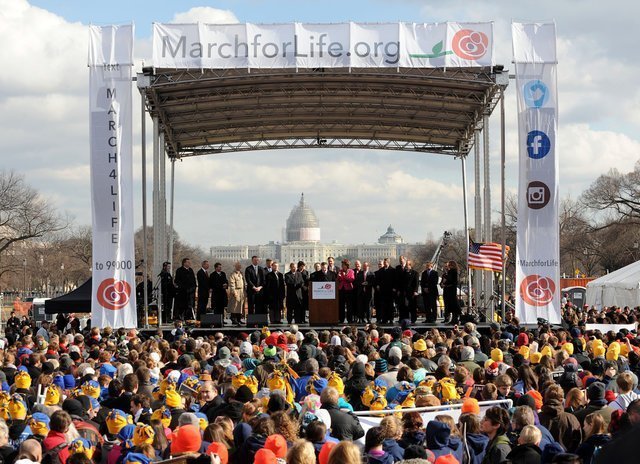 A group of Capitol Hill lawmakers addresses crowds of supporters during the March for Life rally on the National Mall in Washington Jan. 22. Tens of thousands took part in the annual event, which this year marked the 42nd anniversary of the Supreme Court's Roe v. Wade decision that legalized abortion across the nation.

WASHINGTON (CNS) — Both the number of abortions and the rate of abortion is dropping, according to figures released in the third annual "State of Abortion in America" report issued by the National Right to Life Committee.

The number of abortions, which had peaked at about 1.6 million in 1989, is now down to 1 million, according to federal Centers for Disease Control and Prevention statistics quoted in the report, which was issued Jan. 14.

The abortion rate for all women of child-bearing age is now down to 210 abortions per 1,000 live births.

The number of abortions performed at Planned Parenthood clinics, though, is up 250 percent in the same time period, according to Carol Tobias, NRLC president. The rate, Tobias added, has remained "relatively steady the last three years," although the numbers have dropped for other services Planned Parenthood provides at its clinics.

Tobias characterized Planned Parenthood’s revenues as "steady abortion income and a cool half-billion in income from state and federal governments."

"This is the first time now that the Congress has actually approved legislation to defund Planned Parenthood," said Douglas Johnson, NRLC’s legislative director. "The procedural pathway has been set. The only thing lacking now is a pro-life president."

Johnson said the current Congress is "a pro-life Congress." He cited 10 House roll-call votes and four Senate roll-call votes, all of which had garnered a majority of pro-life votes. He added none of the Senate votes met the threshold to override a presidential veto of the defunding measure.

That would apply to a scheduled Jan. 26 vote in the House to override Obama’s veto. "That veto is going to be sustained," Johnson predicted.

The "State of Abortion" report noted that for 2012, the last year for which statistics are available, "more than one in five … abortions performed at eight weeks gestation or earlier were listed as ‘medical’ abortions by the CDC." "Medical," the report added, "is code for chemical," frequently "morning-after" drugs.

One exception to the 2012 statistical overview is the number of women dying from a legal abortion, the last year for which statistics are available is 2011. That year, two women died, compared to 10 in 2010. Since the 1973 Supreme Court decisions permitting abortion virtually on demand, 424 women have died in abortions, according to "The State of Abortion."

The biggest toll, though, Tobias said, is the number of babies aborted, which she put at 58 million since the joint Roe v. Wade and Doe v. Bolton rulings. In addition to the unborn children, Tobias cited "the lasting impact the abortion had on the mothers of these children."

Even with lower rates, about 1 million abortions are still performed annually in the United States, Tobias said. That reflects a 4.2 percent drop from year-before levels.

"We know ultimately we will be successful," she said. "The immutable truth: Killing unborn children is wrong."