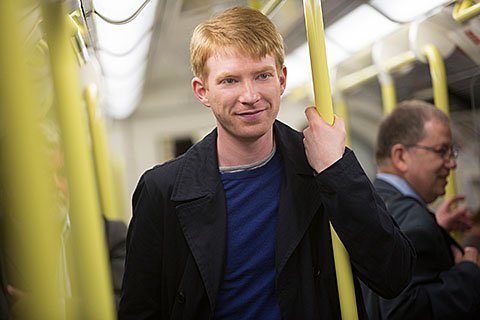 Domhnall Gleeson stars in a scene from the movie "About Time." The Catholic News Service classification is L -- limited adult audience, films whose problematic content many adults would find troubling. The Motion Picture Association of America rating is R -- restricted. Under 17 requires accompanying parent or adult guardian.

NEW YORK (CNS) — If you could play God, would you — or should you? That big question is at the heart of the romantic comedy "About Time" (Universal).

Written and directed by Richard Curtis ("Notting Hill," "Love Actually"), "About Time" is a wish-fulfillment fantasy about changing your destiny at will, in this instance to win the love of your life. It’s a tempting confection, but with a bitter aftertaste. The manipulation of others for selfish reasons, coupled with disrespect for the role of divine providence in one’s life, may leave the viewer feeling empty rather than satisfied.

On his 21st birthday, Tim (Domhnall Gleeson) is given a rather unusual present by his father (Bill Nighy). He informs his shy, insecure son that the men in the family possess a special gift: They can travel back in time. It’s as easy as finding a dark space, clenching your fists, thinking of a specific moment, and — presto change-o — you’re there.

Dad offers few guidelines on how to use this ability other than a command to have "an extraordinary life." So the newly confident Tim jumps inside his bedroom wardrobe (shades of Narnia) and travels back to New Year’s Eve to kiss the girl he was too shy to the first go-round.

And so Tim discovers his purpose in life: to use time travel to land a girlfriend, fall in love, and have a perfect, happy life.

At first it seems so easy. Tim meets Mary (Rachel McAdams) at a restaurant, and decides she’s the one. Multiple do-overs back in time refine and, ultimately, seal the deal.

This is where "About Time" intersects 1993’s "Groundhog Day." Unlike that charming film, where the hero betters himself as well as the world around him, "About Time" takes a more narrow view. Tim is only interested in his own happiness. In fact, when he tries to change the past of others (for their own good), he decides not to, as the consequences of doing so would have an adverse effect on his own carefully manufactured "happiness."

In the end, "About Time" reconciles fantasy with reality, with a message about appreciating life as it naturally unfolds, accepting the good while dealing with the bad. Unfortunately, the journey to that weepy, overly sentimental resolution is riddled with distasteful and sometimes sacrilegious "humor."The film contains semi-graphic premarital sexual activity, brief nudity, several vulgar gestures, some sacrilegious humor and sexual innuendo, and much profanity and crude language. The Catholic News Service classification is L — limited adult audience, films whose problematic content many adults would find troubling. The Motion Picture Association of America rating is R — restricted. Under 17 requires accompanying parent or adult guardian.